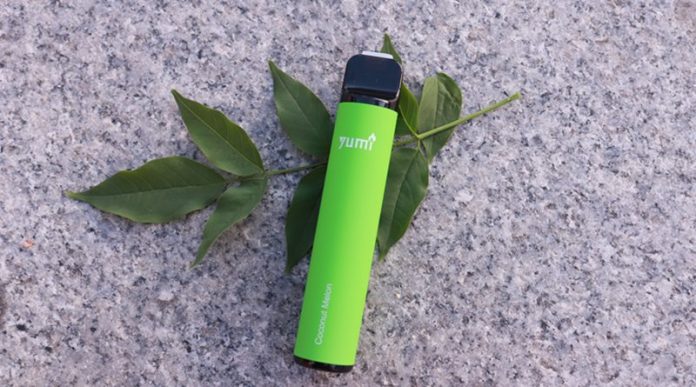 Disposables. Probably the most contentious subject in vaping right now. Some people love them, some people hate them but there’s no getting around the fact they’re divisive. Let’s get started the Yumi Bar 1500 Puffs Review.

Personally, as a vaping enthusiast, I’m not particularly behind the concept but as a rational person I can also see their merits and am willing to make a case for them on that basis. Although also as an environmentalist too this isn’t without reservation and this comes with a large caveat.

That caveat being that they’re disposed of properly.

You see, the main problem I, and others, have with them is that they are disposable, and as a result most will end up going to landfills and polluting the ground toxically.

If, however, they were called ‘recyclables’ and incentivised to be disposed of in a safe manner I’d have far less of a problem with them and be far happier for them to be used, because as an introduction to vaping and conversion tool they’re really rather useful.

Whereas even a pod kit might be seen as confusing and a speculative outlay, ‘recyclables’ like this Yumi bar are far less intimidating and committal. You just unbox it, unwrap it and go. It couldn’t be simpler.

At well under half the price of a packet of cigarettes and offering six times the puffs their financial merits are clear.

They won’t save you as much money as a proper kit but their simplicity and accessibility offers wavering smokers an opportunity to try something else without the hassle of having to learn about coils and select from thousands of juice flavours.

All are fairly safe offerings and suit a wide range of pallets. However as these are all fruit or sweet based if you’re after a tobacco flavour you’re stuck, and that does kind of somewhat counter my argument about these being a conversion tool.

Purely as a device though they work really rather well. They offer a tightish draw to mimic a cigarette and produce a balanced amount of vapour that allows them to be easily used indoors without problems – where the killjoys allow, of course.

The bars come pre-filled with 4.8ml of juice and have a full charge of 850mah battery life to get you through it.

This seemed perfectly sufficient in my testing and the juice usually expired before the battery.

I was likely even getting more than the advertised 1500 puffs though as the potency meant I only needed smaller draws.

The flavours themselves are all quite good too. They’re certainly an improvement on the ‘recyclables’ of old.

They’re not like vaping normal juices either, they’re far punchier and far sweeter – but they’re all perfectly vapable, even to an experienced pallet. While not offering the complexities of flavour many of us are used to, you have to remember who they’re aimed at.

Even at 50mg nicotine salt strength the head-rush isn’t particularly any more pronounced than a normal 20mg juice but the sweetness and succulence is.

I suspect that part of the reason they’re so vivid and powerful is that they seem to be super concentrated and use a much thinner juice.

If you dismantle one the liquid is held within a sponge and seems far less viscous than a normal e-liquid – and without this it’d probably leak, so it probably couldn’t be reproduced for a normal tank or pod, despite the ingredients all being pretty standard.

It’s all a far cry from where I started off though – and it’s here I have a confession to make.

Even as a ‘serious’ vaper, my first vape was on a ‘recyclable’ too, and although it was a poor tobacco flavoured early one, it did provide enough for me to know there was something else out there. I quickly moved on but it was the Genesis of my experience, and without it I might not be here writing this review now.

If I’d have had these I might’ve taken up vaping sooner.

I’ve seen it argued by my contemporaries that these are still not necessary because even their stupidest of friends can understand the basics of a pod kit, but I disagree. While a middle aged man might be able to do so, could your Mum? Your Aunt? Your Grandparents?

And more to the point do they even want to? Do they want the hassle of changing coils and sifting through liquids with strange names?

This does offer an accessability to those who otherwise may not be interested.

Even for seasoned vapers it’s sometimes convenient to pick up a little stop-gap.

As long as you’re responsible, is it really such a bad thing to have a little something to tide you over?

We have to remember the diversity of people in the world too. While smoking unites all people, vaping does not.

Even after all this time vaping is still largely a thing of enthusiasts, and while pod kits have made it more accessible there’s still a large number of people that haven’t even considered trying it, let alone actually done so.

If pod manufacturers offered basic liquids with their kits it might be different but as yet they don’t.

My big fear though is that the popularity of these will be used by the anti-vaping lobby as a stick to beat us with.

If land-fills start filling up with lithium-ion batteries it can only add fuel to the fire and if they become fashionable too it may even attract youngsters who’ve never been smokers.

While I enjoy vaping and it may be hypocritical of me, I wouldn’t want to attract impressionable young people into it.

I really hope it doesn’t turn into an ‘alco-pop’ style controversy. Although given their sweetness six year olds might be the only ones that can vape them!

So all in all, while you may or may not agree with them, remember who they’re for and try to be civil on the subject.

While I’d prefer for everybody to use something reusable, I’m also old enough and wise enough to know that’s unrealistic for some people and that alternatives are needed. As devices these Yumi bars do offer that and are far superior to their awful forebears. As hard as it may be for some hard-core vapers to stomach, these do offer a pleasant vape and despite being so basic the difference from the past really is night and day.

While I’m unlikely to be a regular user of them myself I’m not going to judge people who are.

Just please, if you are going to use them, dispose of them properly and take responsibility for yourself.

If you’d like some you can get some from HealthCabin. You can also get 30% off just for signing in and a further 10% for being a new customer.

This review was written by Ryan from POTV(Planet Of The Vapes).