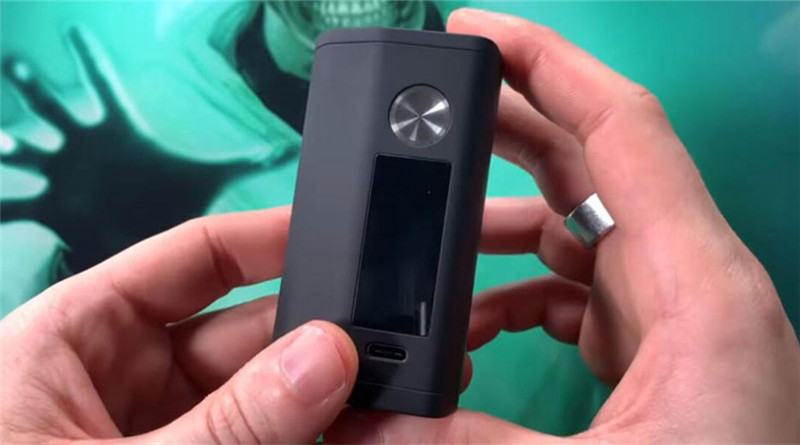 Hello Everyone and welcome to Pizza Dave’s Vape Reviews and today I will be going over what I think of the Asmodus Minikin V3. Yes, this one is coming way after the release. It was sent to me months after everybody else has given their opinions, but regardless, here it is. The Minikin V3 (and V3s) is Asmodus’ latest dual battery mod. It utilizes two 18650 batteries, has a max output of 200w, and features their new GX-200-UTC chipset w/ touchscreen functions. It doesn’t change things up a whole lot from some previous devices, but there are a few new features added. Let’s get right to it eh?

Disclaimer: This device was sent to me by Healthcabin for review.

– Available in rubberized black, metallic red, glittery blue, and glittery brown. They don’t call these colors with those adjectives, but that is what they are. Mine is the brown color. It is very glittery, as the paint is filled with metal fleck. I assume, like many Asmodus products, we will see several new colors roll out over the release of this device. 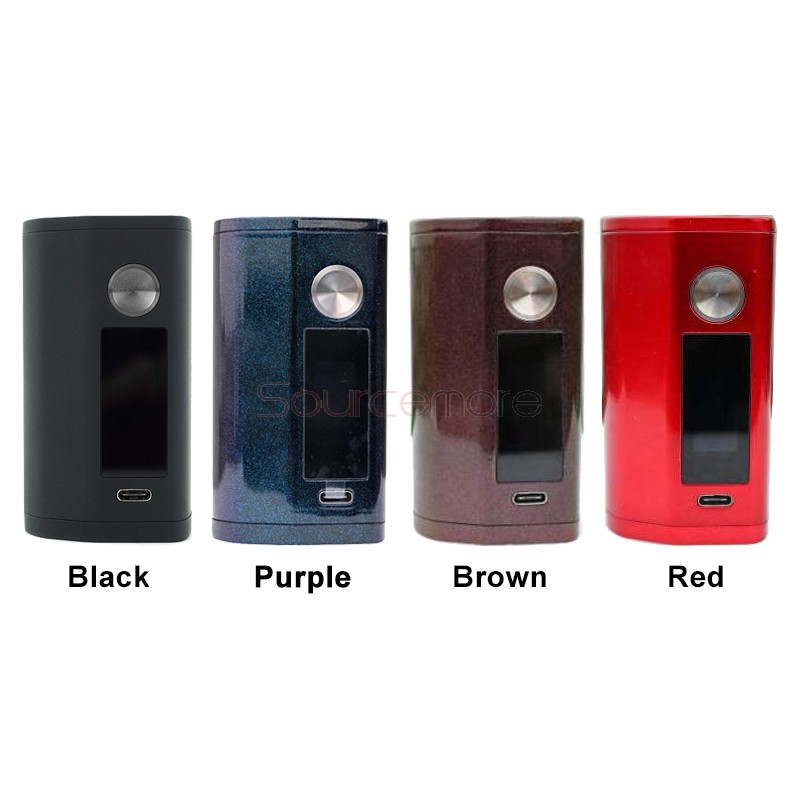 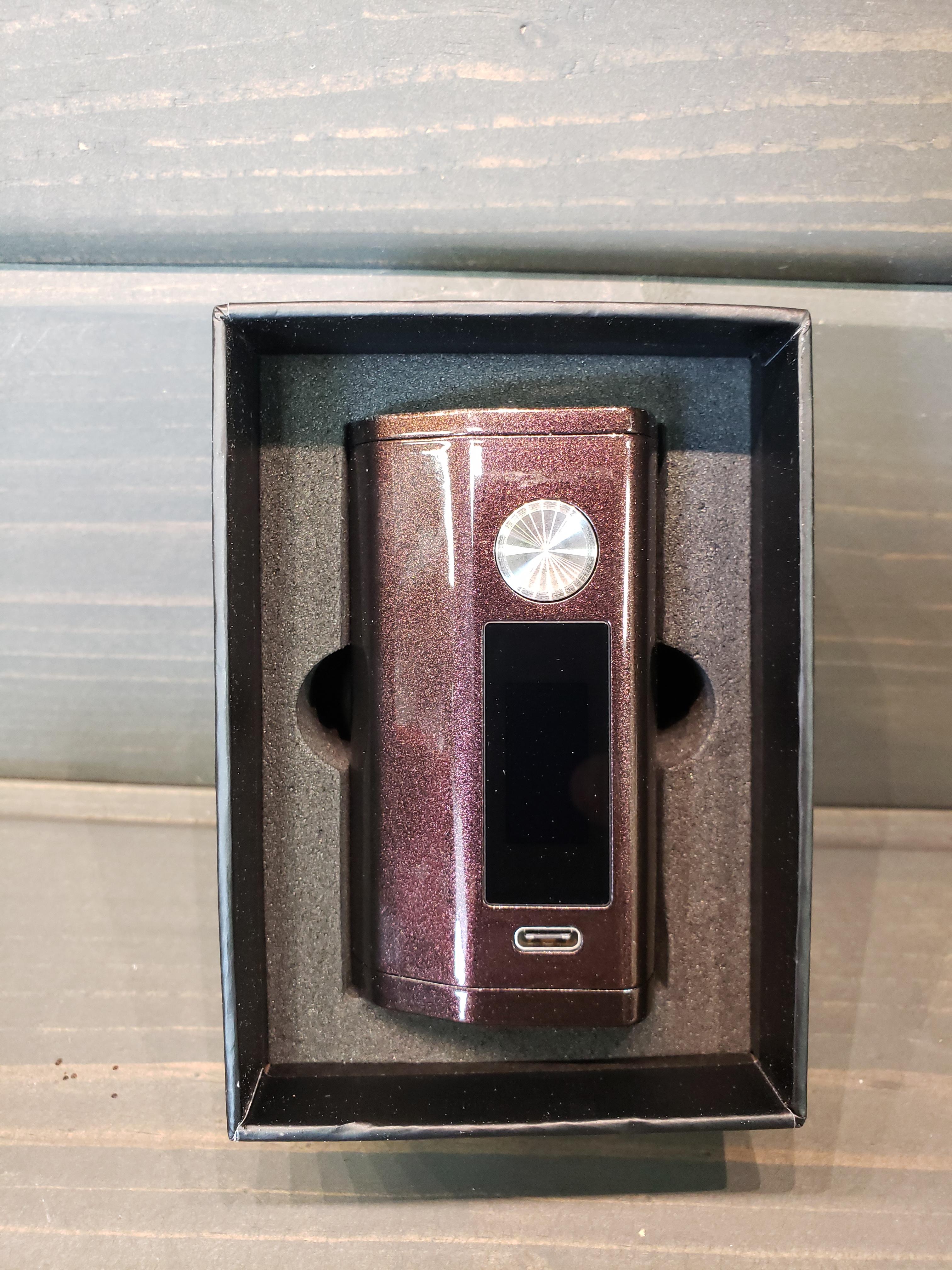 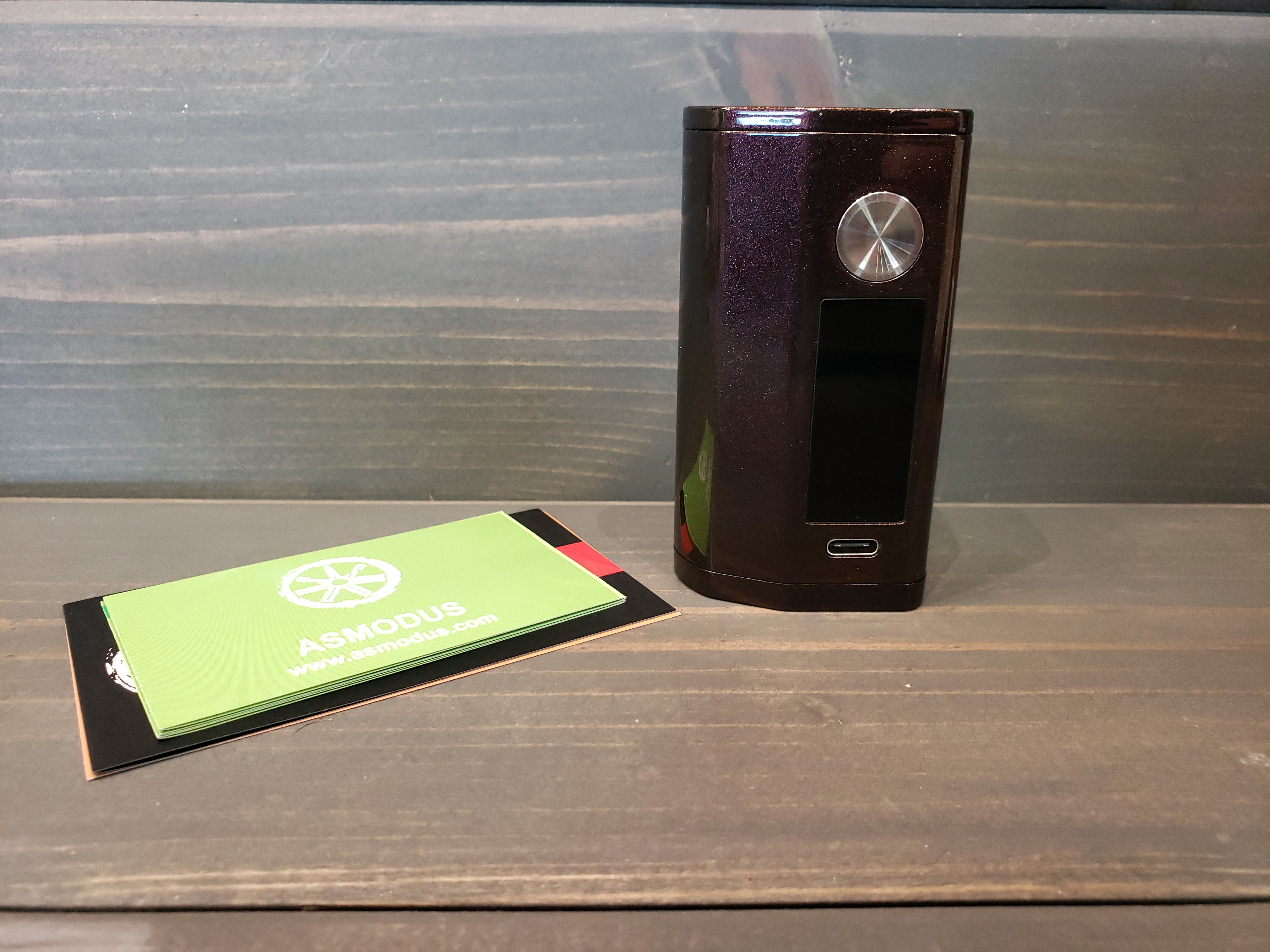 Alright, so if I really dive into the operation of this device, it is going to get long winded and boring. If you have every used an Asmodus chipset, then you know that they have some odd ways of going about things. I am going to attempt to keep this one short, sweet, and to the point. First off, this device has a fire button, but uses a touchscreen for all adjustments and menus.

The menu of this chipset features colorful symbols for each sub-menu. Swiping left or right will guide you along. Clicking the fire button within these menus acts like a back button.

This menu isn’t terrible, but it takes some getting used to. I don’t particularly like clicking the fire button 5 times to enter a menu, as often times this pulses the hell out of sub-ohm tanks. Once in the menu, it makes sense and there are plenty of features to utilize. There are a few things you can do right from the main screen as well using swipes.

Some extra things to talk about here. The vibration or haptic feedback is underused on this chip. It only goes off when there are errors (like no atomizer). I would have loved to see this happen when adjusting wattage or clicking through menus. Another odd feature is a shortcut to changing the color of the screen. Use the device as a shake weight. Yes, a few hard shakes back and forth and it cycles through the colors.

Alright, so this is what everyone really cares about. I have said it time and time again, that I am mostly a wattage only vapor. The majority of my testing was done in wattage mode, but I do like to do some basic tests of the TC operation. As far as wattage goes, there is not much I can complain about. The mod performs well and puts out the power needed to get a good vape. I have no gripes with performance here whatsoever. Now is where things get tricky, and that’s with TC. I installed my usual tester RDA for TC with a basic round wire SS316 dual coil build. I placed the mod in TC for SS316, set to 400 and hit the fire button. Nothing happened. I then realized the resistance was not quite right, so I removed the atomizer, hit fire, then put it back on. I went to take a rip, and it did nothing again. I was super confused. Started looking at the screen, and for some reason, it kept showing the old atomizer resistance when I would hit fire. I went into the menu system and to the resistance setting and detected the new resistance and then it kept it for some reason. Back to hitting fire, and I then had some vapor happening. However, with the stock TCR setting, I found that 350, 450, even 600 degrees all felt the same. I played with some TCR settings on the device and got it to start to “feel” like my desired temp, but then it wouldn’t back off when the cotton was drying and unleashed an awful dry hit on me. I am basically saying that either mine is a dud, or it needs some serious adjustment to the TCR. I am basically calling this one a no-go for TC users. 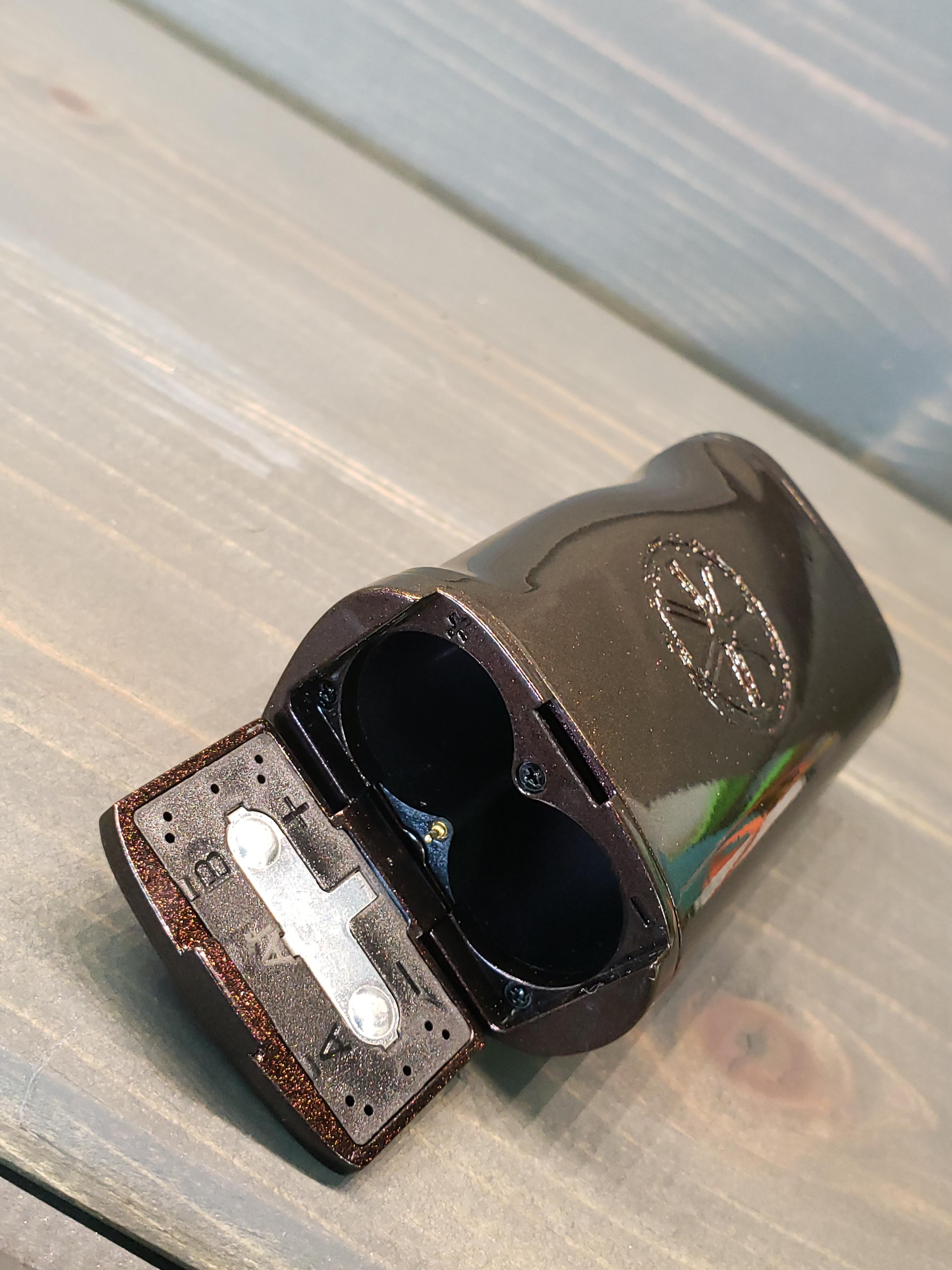 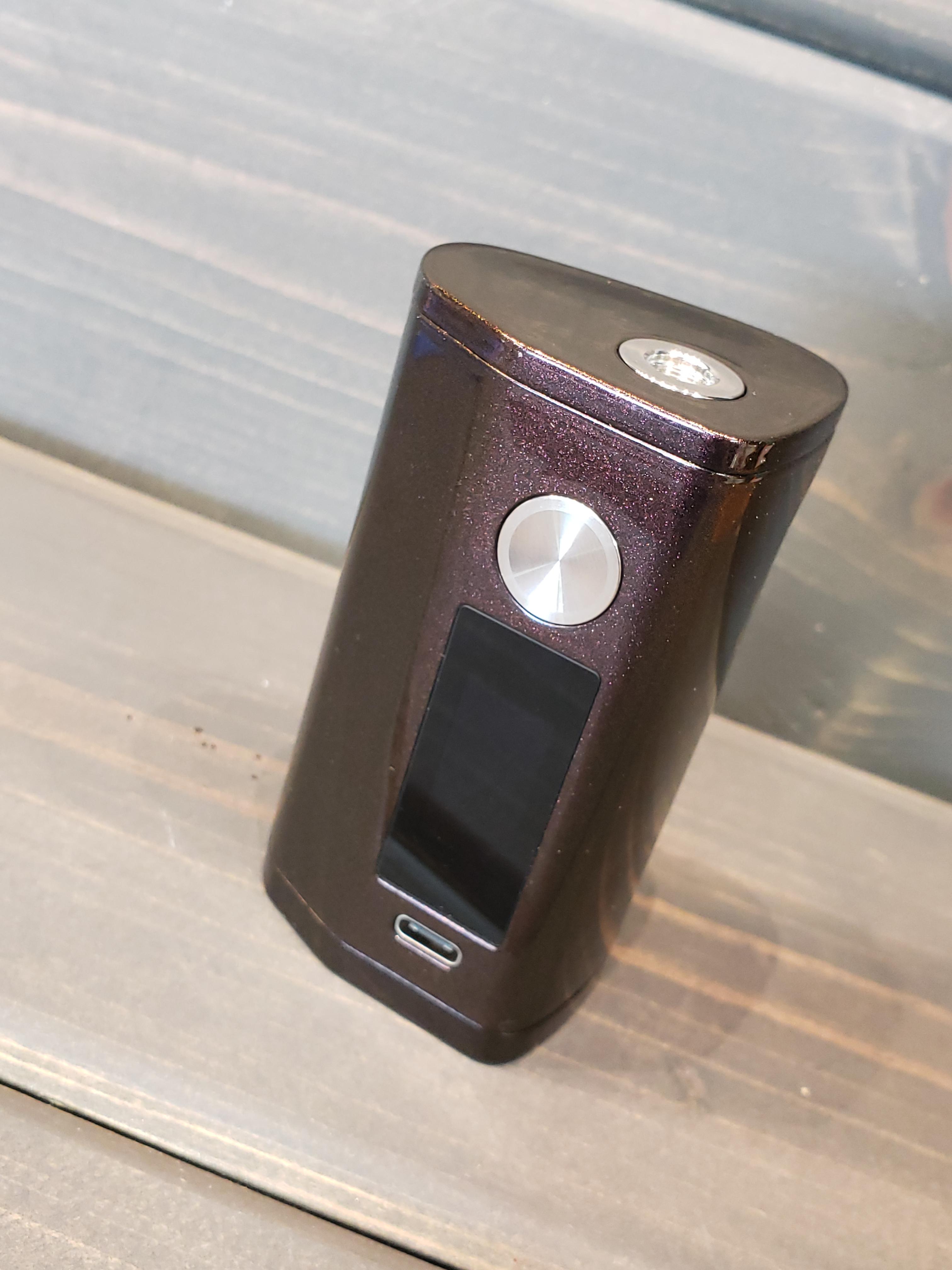 Here we are at the section I like to type the most. I like to type this the most because I get to unleash my opinion rather than typing a lame factual document, so let’s see here. First off, I think the build quality that Asmodus has, as always, feels pretty solid. I don’t like that they went to a battery door instead of a magnetic back, but I guess it is what it is. I never had issues with that, but I just don’t like them due to previous failures. The shape of the device is odd. If you are left-handed, it fits beautifully and is one of the most ergonomic devices out there. If you vape right-handed, it is a bit of an acquired grip. It kind of fits right but feels odd. It grew on me over time, and I didn’t think about it much, but I wish the orientation was flipped around for righties. Another oddity with the design is the placement of the 510 pin. I really wish Asmodus would somehow find a way to center the 510, as their placement limits you to a 25mm atomizer without overhang, but the top is a blank slate, large enough for 30mm. The menu system and all that isn’t bad, but it doesn’t take some getting used to. The display looks good, and shows you everything you need, but some of the menu features are fumbles like in previous designs. Example, adjusting wattage with fat thumbs like me blocks when you are adjusting if you hit up. Same goes for other adjustments, like temperature. Scrolling up means you cover what you are adjusting. Other than that, the touch screen works pretty well and isn’t too finicky. I found myself really enjoying the testing of this device. I had a Minikin V2 and a Lustro and found this adds some nice things to it that they didn’t do. The display is cleaned up, it isn’t tippy like the V2, and it feels good in hand even for a right hander. The TC function doesn’t seem to be functional, but it works well for wattage vaping. I think that Asmodus fans will be happy with this device, as it feels well built, looks nice, and has a lot of features on it. If you are new to Asmodus, I think it packs enough features to slightly edge their previous models.

If I this were to accidentally fall into my pizza oven would I go out and get another? Yes. I don’t like this brown color, but I am going to pick up a black or red one for myself actually. It works for me, a wattage vaper, and is something that grew on me the more I used it.

Thank you all for reading and thank you to Healthcabin for sending this my way for review. I am seeing this online for about $65-90. It rea

REVIEW CRITERIA: I use each item for about two weeks to ensure I have collected enough data to adequately write a review. I use the same e liquid in tanks or rdas throughout all my reviews to ensure that I am comparing apples to apples between all modern equipment. I do not post reviews until I feel confident that I have used it enough to give an educated review. The reason I started doing reviews was due to poor purchasing decisions in my vaping infancy about two years ago. Back then, I purchased several different pieces of hardware without really enjoying it and I hope my reviews can guide people into spending their hard-earned money more wisely than I did! ****Keep in mind that some items I receive may be pre-release and not in retail packaging. Quality may be less than the finished product and what is in the package may differ from the retail package as well.