Hi people.
Recently I was given the option of trying out a few products by Cortana from Health Cabin. Mods, tanks, pods, but out of all of them one stood out in particular and that as you can see is the Owl Tank by Advken.

Yep, there were some mods and other tanks but really, they were just that, mods and more tank’s. And although this is another tank there is one particular feature that grabbed my attention. Top air flow. Now top air flow isn’t exactly new but there has been some fails and with this being one that supports the ever increasing Mesh Coils which have become so popular I was dead keen to give this a go. My particular interest in top air flows comes from my love of the outdoors and with this comes some travelling over a number of altitude changes. With traditional tanks this can be an issue causing leaks due to sudden increases and drops in air pressure. Top flows don’t suffer leak issues in these situations so it should go without saying why my interest in this tank was piqued!

The Owl Tank comes well packaged in a nice little box of which the lid is held closed by a magnet. Now usually I dont care about packaging to be honest as you don’t vape anything other than what’s in it. But this really is a nice touch making it useful for storing any small items in for safe keeping.

Enclosed in the box with the tank is a spare .16 ohm coil, the tank has a .2 pre installed, there is a spare standard glass, some replacement seals and a cloth for cleaning the tank. The tank itself comes with a 4 ml bubble glass.

The tank has a top fill system where it slides back to reveal the fill port. This fill port is nicely recessed meaning no juice goes anywhere other than where it should go. The top slides back nice and firmly and although there is no noticeable click into or out of place like some have, it stays well put and I’ve had no issue with it inadvertently opening. But there are a couple of things I should point out in regards to filling it. Due to the side pillars that are used for air chanels taking up some side space you will notice the front section, immediately in front of the fill port, will appear to fill faster, and it does. It takes a little for the juice to flow and catch up so to speak at the rear. The best way to get a balanced fill is to slightly tilt the tank back. This will allow gravity to assist in a more even fill. Dont try to fill it too fast though and allow it to fill evenly, otherwise you can get an overflow if you don let it drain away from the fill port section.

Now to the air flow.
I wasn’t sure how good or bad this would be. A hit? A miss? Well I’m happy to say as far as I’m concerned it’s a hit! It works well. What it has are 2 large top air slots through which the air is drawn down through 2 air chanels which make up the inside frame of the tank into a sealed section at the tank base where the coil is fitted, through two openings on the coil seat then up through the coil in the same way now that a bottom air flow utilises. The tank top does not screw onto the coil. Instead it screws onto the base, sealing the coil base and air flow section from the juice via seals.

The coil top simply is sealed by compression against a seal leading up to the mouthpiece section. It really is well done and works perfectly. 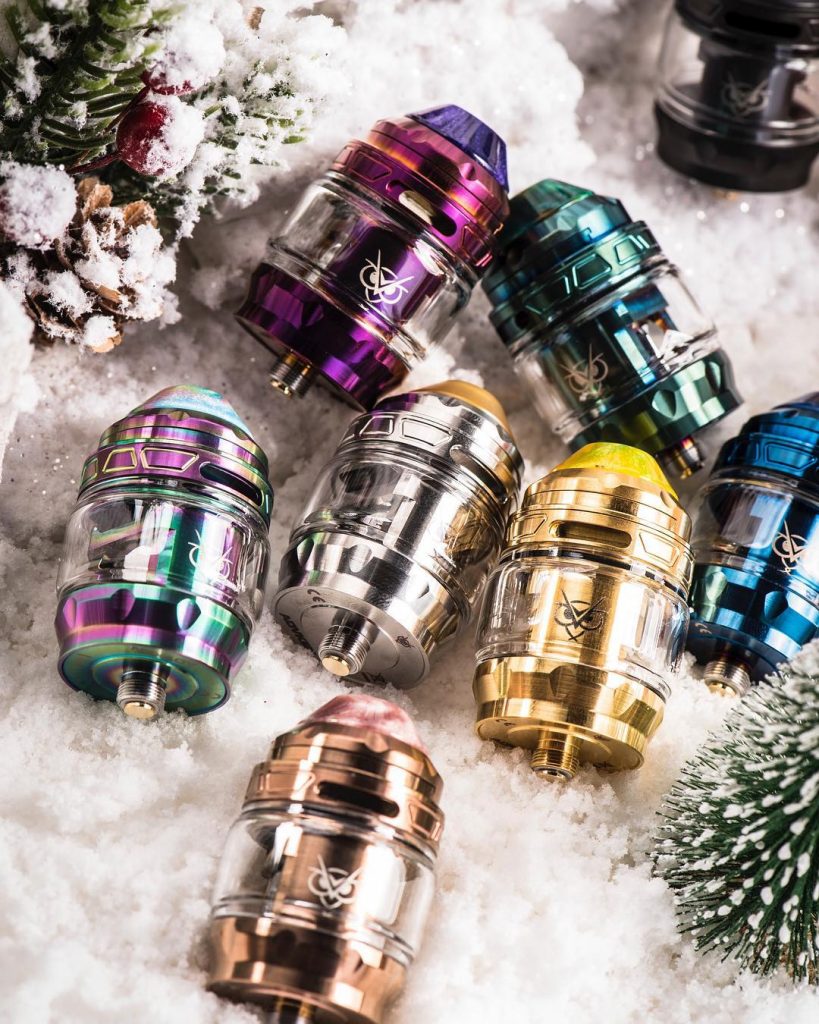 Hows it Vape?
Well it took a full tank to properly break in. The first half was getting the cotton run in, there was a little bit of that new cotton taste but not excessive and nowhere near as bad as others I’ve tried. The last half was just more settling in with flavour increase. Once done I ramped it up to 60ish watts and got nice vapour production and good flavour. Smooth too, no hint of spits or pops. The coils are smallish though, well to me they are as I’m used to the huge Plex coils I often use. But, even though they are small in comparison they work admirably. If I had one nit pick it’s this, being smallish there is a little restriction on the draw similar to the UForce T2 tank. It’s not a deal breaker as the vape experience is nice, but I personally love a wide open big unrestricted inhale. So if your like me keep that in mind. I can assure you though this tank will definitely be replacing my Revvo top air flow tank as my take out bush tank, no problem. The vape from the Owl is better for sure flavour wise than the Revvo. Now that drip tip, mouth piece. It does look different and to be honest I wasn’t sure I’d like it. At first it felt a bit odd being so used to chimney type tips but after several days use it grew on me and I actually like it. I think it was just the initial “mmm, this is different” thing about it that seemed odd but now I can try another tank, then this and the transition between the two doesn’t worry me.

Now about its size. This tank is no little unit by any means. Its base is just a tad over 24mm but it’s overall build is bulky. I guess this is the trade off though for the air flow system it utilises. It’s a solidly built thing and feels so. So on smaller mods it could look a bit odd. Its sits fine though on my Wismec RX 2 and VStick but looks like a perfect match on my Vaptio N1.

It may not be to everyone’s taste but it does do what it’s been designed for really well in my opinion and has been cleverly designed at that.
Many thanks to Cortana at Health Cabin for giving me the opportunity to use this unique Owl Tank.