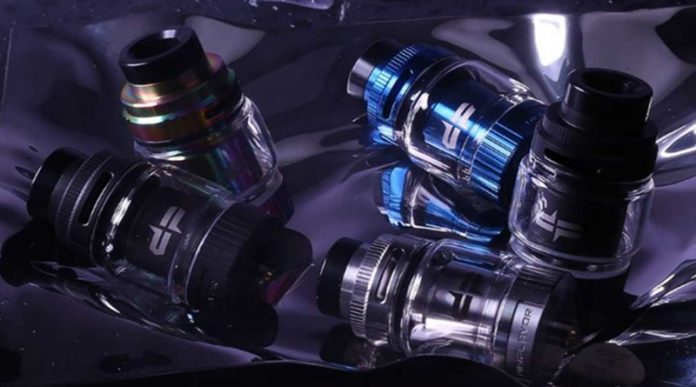 Contents hide
1 Introduction
1.1 Product Includes
2 First impressions
3 Build
4 How does it perform?
5 Airflow
6 The light show
7 What could be improved?
8 Conclusion
9 Disclaimer

The Digiflavor Torch is a 26mm top airflow dual-coil RTA – but before I cover anything else, yes, this is the RTA with RGB lights. Having an RTA that lights up might be the coolest thing you can imagine, or it might be a complete turn off – however while I will be covering those lights in the review, I’m not going to ignore that the main purpose of this RTA is vaping, not providing a light show.

No spare glass? I’d be really annoyed if I couldn’t use this RTA because I’d broken the only glass tank it comes with.

Everything is very familiar, basically the Torch RTA is a Geekvape Zeus X with Dead Rabbit 2 RTA posts. Digiflavor is the sister company of Geekvape, which explains the Zeus X connection and Hellvape used the Drop RDA posts in their Drop Dead RDA, so I guess their relationship isn’t too bad either.

Ignoring the familiar design elements and the fact that it’s going to light up like a Christmas tree, it’s a nice looking design with minimal branding. The 5.5ml bubble glass isn’t overly bulbous and everything looks quite restrained and stealthy. (so far)

The build quality is fine, everything screws in smoothly and the quarter-turn top cap feels secure.

Due to the post design, the build is really easy – just remember that the gold screws are for the positive posts and the silver ones aren’t, drop your coils in, secure them and snip them from under the posts. The only thing left to do is to dry burn your coils to remove hot-spots and align them – I put my coils as close to the center as I could without them touching and raised about 1mm from the posts.

Before I wicked my coils, I put on the internal airflow chamber to make sure that my coils weren’t touching it and giving me any shorts.

While this style of post makes getting the coils is really easy, it also means that the coils are very high from the deck which leads to long wicks. As the juice has to travel quite far up the wicks, I thinned, fluffed and combed my wicks a lot. Of course how difficult the wicking is will depend on your VG/PG ratio, coil choice and vaping style as well as your wicking skill, but overall this style if wicking has the potential to be more difficult than something with short wicks.

Overall, I was quite pleased with the flavor and vape quality of the Torch – the only concern that I had was that it seemed to drink my juice at a faster rate than I’m used to.

Given the choice, I would always choose bottom airflow and accept the risk of leaks. However the airflow in the Torch is effective and smooth, also having top-airflow would make me far more confident about having my vape in a bag or pocket.

The RGB lights cycle through a series of colors while you’re vaping and the more power you put through the coil, the brighter they are.

The are no features or settings, you can’t operate the lights without firing your vape, neither can you turn them off.

What could be improved?

Is this review about the vaping performance or the lights?

As an RTA, it performs well – the wicking requires a little thought, but that’s the trade off for having the user-friendly post design.

As far as the lights are concerned, I don’t mind them – mainly because I have numerous RTAs and I wouldn’t take this one anywhere that they would make me feel self-conscious.

I’d love to be able to write about how the Torch compares with the Zeus X, however I don’t have a Zeus X so I have no idea.

As an overall package, there aren’t any glaring issues with this RTA – it performs just how I’d expect a dual-coil, top-airflow RTA to perform.

The Digiflavor Torch RTA was provided for the purposes of this review by Healthcabin who currently have it in stock and for sale for $18.28. In addition to catering to end users, HealthCabin is also one of the biggest vape wholesale distributors in China, if you’re a vape business owner, just contact them to get competitive wholesale prices.