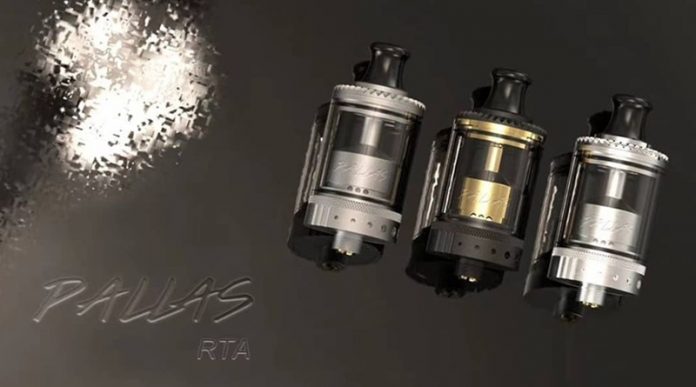 My first review for a Gas Mods product, the Pallas MTL RTA. Special thanks to Healthcabin who sent me this RTA for the purpose of the Gas Mods Pallas RTA review.

The most beautiful MTL RTA I have owned, so happy to have received the gold-black version, just stunning. What makes it beautiful as well is the very thin top-cap. Not sure about the quality of the gold-plated elements, but mine still look perfect after a good 2-week use.

Very nicely engraved onto the chamber is ‘Pallas’, and that is the only branding you see when on top of a mod, nice.

It is a 22mm RTA which to my experience are the perfect size for a MTL RTA The smaller the diameter the smaller the chamber and chimney, which helps a lot with flavor and throat-hit.

In the packaging you get an additional tube which is half made out of stainless steel and half out of PCTG. Nice they included a second tube with a different look. The pieces come separately, which you can screw onto each other. Be careful when doing so as the PCTG threading is vulnerable. I like the RTA with both the glass tube and the additional SS/PCTG tube, cannot really tell my preference.

Nice quarter-turn top-fill. With the ridges it is easy to open and get to the two large enough fill-holes. I do feel however it opens up a bit too easy once the top of the tank is lubricated with liquid, some more restriction would have been nice. What to say about the drip-tip, a standard but comfortable Delrin shaped drip-tip, the type I like for MTL. You can always use your own 510’s of course. Nowhere is mentioned what the capacity is, but from my findings it is about 3ML, proper for a MTL RTA.

When first screwing of the base I found an issue with the O-ring on the deck which seals the tank, it is too large and when screwing on the deck the O-ring tends to end up sticking out of the tank. Overtime it fixed by itself, probably because of the heat the O-ring shrank a bit.

Airflow ring is a ‘click at hole’ system. On the bottom side of the base a ball bearing is placed which then clicks into place at every airflow hole. Same kind of system as on the Ares II by Innokin, but unfortunately this airflow ring does not have a stopper. When turning too far the ball bearing ends up inside the airflow hole.

There is 6 different airflow holes varying from very restricted to restively loose. I like using the tiniest or the second tiniest most, a very nice and tight MTL draw. Don’t recommend using this for a loose MTL or restricted DTL, the sound from the two largest openings is very turbulent, whistling. Another issue for me is that it is very hard to see on which airflow setting it is, the airflow inlets are quite deep under the airflow ring. Another issue I have with the airflow ring is that it is very hard, almost impossible, to turn while on top of some mods.

It is a bit hard to unscrew the build deck sometimes. You have to grab onto the knurled ring strongly and try not to hold the airflow ring at the same time. It is especially hard because the airflow does not have a stopper, it just keeps turning.

Read some comments about this RTA that the center airflow port on the deck is too large to get a legit MTL-experience, but I do not agree with that. You can still get a very restricted MTL draw with lots of flavor. Of course, it would have been nice if it was possible to get an additional insert to make that hole a bit smaller.

An easy to build on deck, with two rather large flathead screws on each side and a tiny walled channel to help to keep the coil in place. Like the fact these screws are quite long making it easier to get the coil legs under the screw. Also, the sides have a U-shaped carve in so that you can put your coil rod very close to the center airflow. When using a 2.5mm coil you can really get the coil close to the airflow ‘well’ to improve the flavor. With a regular 28g wire a 3mm will also be able to drop into the well. It does get a bit tricky if you are trying wider coils, because when the legs are far apart you need to bend in the end of the leads. For me personally it worked best with a 5-wrap premade clapton coil made by Coilogy.

Enough space for nothing having to comb out cotton very much, proper wicking holes. The three tiny holes on the outside of the wicking ports provide enough liquid to the cotton, no dry hits on this one. Also when using 70VG juices it keeps up very well.

It vapes very nicely, especially with the 3 smallest airflow holes. The flavor is good on this RTA, one of the better ones I have had from an MTL rebuildable. No dry hits, great flavor and a very proper throat-hit. Those are the most important things in the end on an RTA.

Really enjoying using this RTA, and it will be one of those that I will be having in my constant rotation. The flavor is very good, and the throat-hit is exceptional. It looks great, it is easy to build on and it has airflow that allows for a nice restrict MTL-draw. Additional nice feature is the fact you get a different type of tube so you can change the looks.

Good thing about the things I don’t like is that they are ‘avoidable’, once I set the airflow I don’t have to turn it, I only use it as MTL so don’t have turbulent airflow and the O-ring already shrank by now. If its about the limited packaging, prepare yourself some coils and cotton.

This review was written by Sjoerd from ECF, click to view original review there with more photos.