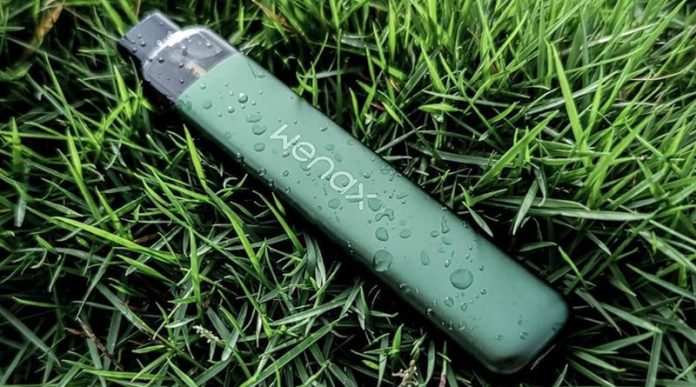 Contents hide
1 Introduction
2 What is it?
3 How do you use it?
4 What I like about it
5 What I dislike about it
6 Conclusion
7 Disclaimers

I could be lazy with this review and cover everything in four or five lines: The Wenax K1 is a 2ml 600mAh pod system, with flavor comparable to the best pod systems, the pods work with all types of juice and last really long, the fill-tab, drip-tip and the fact that it falls over, are all annoying.

But I try not to be lazy…

The Wenax K1 is a stick-type 600mAh pod system very much in the style of the Caliburn, it comes with 0.8ohm and 1.2ohm all-in-one pods, charges via a type-C USB cable and has fixed airflow.

How do you use it?

The one button allows you to turn on/off with five clicks and cycle through three power settings with three clicks. You can use the power button or auto-draw – the auto-draw is responsive, when powered off, obviously you can’t use the fire button, however auto-draw is always active, no matter if it’s powered on or off.

There is a small LED below the fire button that shows the current power setting and battery level.

What I dislike about it

Most of my complaints about this pod system are so minor, that the good points outweigh the bad pods by a large margin.

For someone giving up smoking, or an experienced vaper who wants a backup device, the Wenax K1 is pretty awesome.

The Wenax K1 was provided by Health Cabin for the purposes of this review – the K1 is usually $15.98 on their website, however if you log in with a verified account, this price is reduced to $12.96.

Even though the Wenax K1 that I received was from a distributor, not directly from Geekvape, it was marked as a sample, so the package contents and design elements might change.