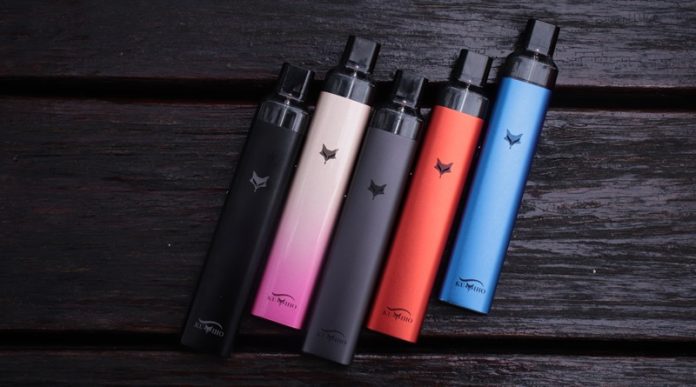 Contents hide
1 Introduction
2 Product overview
3 What do you get?
4 First impressions
5 Pod
6 How to use it
7 How does it perform?
8 Airflow
9 Battery
10 What I like about it
11 What I don’t like about it
12 Conclusion
13 Disclaimer

Nope, I hadn’t heard of Kumiho or their Model V pod system either.
However, I haven’t had a truly awful pod system in a long time, so the optimist in me is hoping this doesn’t break that trend and it’s nice to see a new company on the scene.

The Kumiho Model 5 is 600mah autodraw only pod system reminiscent of the Wenax K1, with 2ml pods, adjustable airflow, a vibration function and type-C charging.

What do you get?

I’m not sure how I feel about not getting a USB cable with this device, it could be seen as creating less waste as most people probably have numerous type-C cables already, or it could be a problem if don’t have a cable to hand.

For a pod system with no fire button, there’s only so much that can be said about the design and aesthetics, the Model V doesn’t differ much from most other pods, it’s all rounded off edges with a small fox face in the center, a slider to adjust the airflow on the side and a charging port on the bottom.

Firstly, the coils are non-replaceable – I know it’s not going to save the planet, but I prefer this style as they are far less likely to leak.

The pod looks very similar to the Wenax K1 pod, with the same style drip-tip, but while opening the K1 pod’s fill-port was really annoying, the Model V opens really easily, the pod is tinted but not so much as to obscure the juice level, however half the of pod is inside the device, so you have to tip it to see the level when it gets below half full.

One of the pods has something a little strange – while the 1.0ohm is a very conventional pod, the wick of the 0.6ohm pod sticks out a mm or two from the side of the coil – this is designed to increase the flow of juice to the coil.

How to use it

It’s an autodraw only pod system – you fill the pod, insert the pod, adjust the airflow and vape it.

The LED light on the front informs you of battery level when vaping and charging and it vibrates when you insert your pod correctly.

1.0ohm pod – this is the conventional pod (ie. the one without the strange wicking) and it performs in line with similar pod systems like the Caliburn. It gives the familiar pod MTL experience, with strong, unsubtle flavor and reasonable vapor production. It’s not a bad pod at all, it’s just that most pod systems are offering good flavor nowadays.

0.6ohm pod – firstly, the strange wicking does seem to work well – I deliberately chain-vaped juices that are usually terrible in small pod systems and it kept up with no issues at all. The flavor was good, with the more prominent flavor being very obvious, but the more subtle flavors still present. Vapor production was acceptable for a small pod system. While the 1.0ohm pod was good, this one is my clear favorite.

There’s not much that I can say negatively about the Model V – it’s a solid product and most importantly for a pod system, the coils are good – well, the 1.0ohm is good and the 0.6ohm is excellent.

It’s not necessarily something that I would buy myself, but I would have no hesitation in recommending it to someone who was looking for a small and simple pod system.

The Kumiho Model V was provided for the purposes of this review by Healthcabin who currently have it in stock. In addition to catering to end users, HealthCabin is also one of the biggest vape wholesale distributors in China, if you’re a vape business owner, just contact them to get competitive wholesale prices.