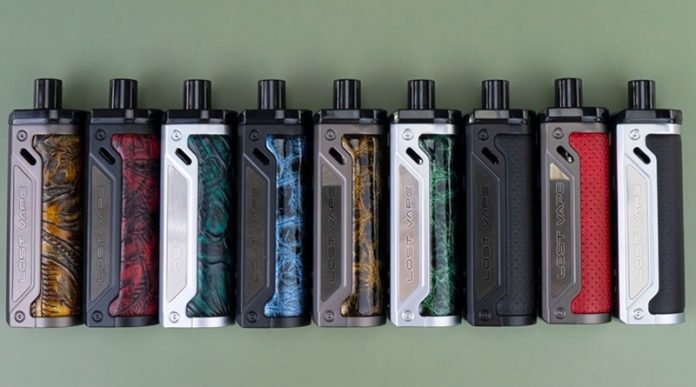 Hello again everyone and welcome back for today’s review that was supplied from HealthCabin and is on the Lost Vape Thelema 80 watt pod mod. This Pod Mod device houses a 3000 mAH built in internal battery and has a wattage range that runs from 5-80w and will round robin, it also is a fast scroller that scrolls in .5 increments. The device is a very simple and easy to use Pod Mod because of no real menu just a few button combinations to make your desired changes. So now that you know the basics of this kit let’s get to the Lost Vape Thelema 80W Review.

After opening up the package then sliding out the inner box gave me the first look of this kit that had the key components sitting in the usual foam cutouts with the mod, extra coil, 2 drip tips, type-c charge cable with extra o-rings. Your warranty card and user manual lay on top of them. Lost Vape supplies 2 coils with the 0.2Ω that is rated for between (40-60w) being pre-installed within the pod, the other coil is a 0.3Ω that is rated for (30-40w). Also included are two 510 drip tips with one having a very narrow bore that would be used for MTL and the other having a much wider bore used for DL OR RDL. The color that was sent for this review is the Gunmetal/Ukiran Leather that has a attractive wild design but is not a spongy type of leather at all.

To remove the pod from the device just pull up on it, 4 magnets are used to connect the 2 together. The Thelema ships with the 0.2Ω mesh coil pre-installed and has a protective orange sticker attached at the base to prevent a accidental firing, this must be removed in order for the device to operate.

After removing the protective sticker remove the coil by just pulling it out. These coils are Push and Pull type of coils. If you choose to use the other supplied coil you will have to unscrew the coil ring at the base that is the devices airflow selector. Be careful not to lose the control ring because if you do you will lose the adjustability of your airflow, and don’t forget to reattach to a new coil when changing. Don’t forget to prime your coils and let it sit for 5-10 minutes after filling with juice.

The Thelema gives the user a few choices in the adjustment of airflow with a couple of holes being one of them and a slotted channel that can be dialed in to your desired airflow choice.

Both of the supplied coils are mesh with my preference being the 0.2Ω for warmth and better flavor, the 0.3Ω takes a little while to break in before flavor improves, after about 2-3 pod fills flavor does improve but IMO it does not improve to the 0.2Ω level. I had no problem with vapor production from either coil except the 0.3Ω was not as pronounced as the 0.2Ω.

As far as the pod itself goes it’s a top fill and I’m happy for that but I have all my juices in 100ml bottles and because of the orientation of the fill port I have to remove either drip tip in order to fill the pod, smaller bottles or glass drippers will have no problem. There really is no other place to put the fill port on top, but the side of the pod would have worked but then to fill, the pod would of had to be removed in order to get to it so I’m happy it is where it is.

The fill port cover opens easily and can be rotated out of the way when filling your juice and it has a big opening allowing air to escape when filling making it a mess free pod. You will notice in this picture that the device is laying flat/front side down and you will see a cutout in the device at the top with the wood grain of my dresser being able to be seen through it, this is the juice view window of the pod but because the pod sits in away from the cutout as well as being tinted you can’t really see the juice level in the pod requiring removal of the pod to see your juice level.

The Thelema itself as a whole system feels very solid and not cheap by any means and has some heft to it without being heavy feeling, the weight seems appropriate for a device of this size. The Thelema is a bit on the tall side of devices in this category but sits solidly on a flat surface without falling over easily, the base holds the device in place nicely. Looking at the base it appears to me that it might have been originally designed for a replaceable 18650.

As I said earlier I consider the Thelema device I received to be a attractive looking piece with a wild design that some might not like but I do. The material the Thelema is made out of is zinc alloy which is why it feels as solid as it does. There are only 2 locations of branding on the Thelema with both locations being on either side of the device. The branding gives it a nice look having some texture with LOST VAPE engraved on one side and THELEMA engraved on the other side. The top of the device on either side has slots cut out for your air supply.

The fire button as well as the adjustment buttons are clicky without being noisy and perform fine and the display screen is bright with the numbers and letters being sharp and vivid. The Thelema offers the user to choose from 6 different color choices for the background and they are as the little squares at the bottom of the display show – blue, yellow, white,red, green and purple that I have as my background color.

As I mentioned earlier this is a wattage only device that really has no menu to it only a few button combinations that I will cover now.

Well folks I think I’ve covered everything and have to say that the Thelema has worked fine without any problems showing up other than the juice viewing window and having to remove the drip tip when filling. There is a nice selection of Ultra Boost Coils that can used in the Thelema but I only tried the 2 that came with the kit and have no prior usage of the other coils.

I hope that in the future a 510 adapter plate becomes available because having the choice of using your own tank would be a big plus. I have enjoyed using the 0.2Ω coil and found my sweet spot at 44 watts with no need to increase. Battery management is very good also.

Airflow is smooth and I found that the 2 hole setting worked great for me giving a warm RDL vape. The supplied wide bore drip tip was what I used in testing this kit and found it functional as well as comfortable and saw no reason to use one of my own. Overall I really like the Thelema 80w Pod Mod Kit.

I would very much like to thank Sue and Heathcabin for providing the Thelema 80w Pod Mod for the purpose of this review, and I hope that this review helped anyone looking to purchase one.

This review was written by Bob from ECF, click to view original review there with more details and photos.