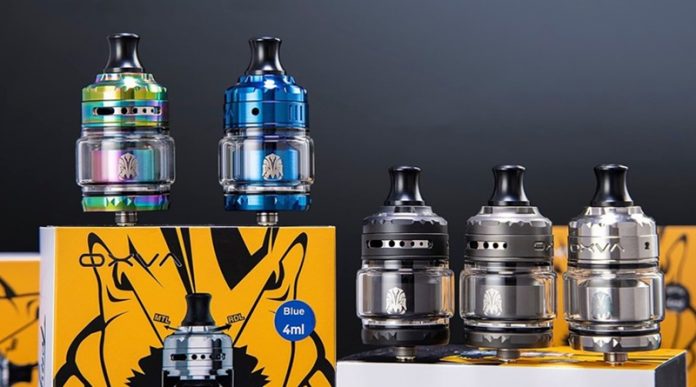 After all that is my task as a reviewer, albeit an unpaid and often intriguing one, and often because you sometimes get some really fascinating things like this to review.

But I have to say, sometimes it’s a hard one too because when you first see something you don’t always know what to make of it, and that was the case with this 25mm Arbiter Solo RTA from OXVA.

On first impressions, it looked genuinely novel – and that’s largely because it is.

It’s quirkily billed as both an MTL and RDL device and supposedly carries some 3D technology – which is really just cut-outs but we’ll come on to that later… – which baffled me a little at first and couldn’t help but make me wonder if they were just trying to be a ‘jack of all trades’.

And given what works is tried and tested and most things are generic now these days anyway, you have to think that being too clever and going against the grain is both brave and foolhardy in equal measure.

That said, if you get it right you do look like innovative geniuses, but if you get it wrong you can end up falling flat on your faces. Think of Homer Simpson and Uncy Herb here. Letting him do that car was rather brave wasn’t it?

But as it happens, OXVA haven’t fallen flat on their faces and they’ve pulled off a bit of a masterstroke.

It’s not perfect by any means, and it’s quite complex, but it does work.

You’d be forgiven for thinking it’s a bit overengineered and unnecessary too, and in some senses you’d be right. People generally know what they want and choose their products accordingly, but for those that want variety and to change between styles, this does enable you to do it on the fly without having to change tanks or carry a second mod. It’s a real two-in-one in that sense and halves the carry, freeing up pocket space for the other life’s essentials.

RDL is probably more prominent too, but it does also do MTL exceptionally well.

The reason for this is in it’s rather clever but practical engineering, and it all comes down to how the Arbiter’s top-flow air inlet works.

It has a rotatable inner shaft and inner bell housing that move independently of the static outer bell to align cut-outs with the deck and determine how the airflow reaches the coil. This happens through a number of inner bell housing voids – that allow or disallow air in from strictly underneath via three 1mm holes – or in from the side via two 3mm ones.

It also has a very effective standard airflow control ring above the glass for fine tuning that work very well and offer a decent range of draws in both MTL and RDL modes.

Oddly though, they’ve chosen to have the airflow enter the tank from only one side which isn’t ideal and creates a slight asymmetry to the sound of the draw and a slight air-rush noise when vaping, but this isn’t offensive and doesn’t create any turbulence.

The other issue with the split bell housing is that it also creates a slight wiggle in the tank so the top and bottom halves feel slightly disjointed and can be rocked gently from side to side making it feel slightly separated, but the seals do however do do a sterling job of preventing leaking and there was no noticeable seepage despite this.

This was quite disconcerting at first and made it a little tricky to disassemble but I soon adapted and it became second nature.

Other than that the rest of the tank is far more standard.

It comes with a 2ml straight or 4ml bubble glass and a choice of MTL or RDL drip-tips.

The build deck is quite ordinary too, but of a practical and proven design and one that I’m personally quite fond of.

It’s a basic single coil affair with two opposed coiling posts and allen headed screws with nice stepped coil slots that make it easy to fit the coils and prevents them from popping out again once they’re in.

These work well for both MTL and RDL vaping and allow for easy change between the two styles without fuss.

You can easily flick between modes and get anything from a near straight through draw to a reasonably tight MTL.

It works really quite brilliantly, doing exactly what it’s designed to.

I think the main reason for this is the method in which they’ve gone about it.

Rather than expanding the boundaries from one side, they’ve started in the middle and pushed both boundaries out, and done it so effectively they’ve pushed them far enough to satisfy both parties.

This really is a neat trick, and one one wonders why no one has tried before.

That said, it certainly is unorthodox.

You don’t expect for something to be able to satisfy everyone but that clever shaft and bell housing really does work and with it they’ve effectively created two tanks in one, and now it’s proven to work, one wonders if the idea will catch on and we’ll see a few more of these appearing over the next few years.

The only thing I really disliked about it is that slight wobble on the shaft and that it’s mildly noticeable on the lips and makes it feel a bit hosepipe-ish, but if they can iron that out then they’ve created something that can certainly move the game forwards.

It really isn’t lacking in anything else because of it – not least flavour.

This too is excellent and gives every inch the full body and texturial experience you’d want from your juice whatever your style.

In RDL mode you get the full sensorial experience and in MTL mode you get that great throat hit followed by the complete development of the flavour, just as you’d want it.

There’s really nothing else to complain about.

Well, unless that slight asymmetry to the sound bothers you.

But other than that, nothing.

This really is complexity and simplicity rolled into one package and no compromise. It performs its job wonderfully and does everything I’d want in two individual tanks, let alone one.

It comes in a choice of five colours – matte black, stainless steel, gunmetal, blue and rainbow – all of which suit it nicely.

You get everything you need to build it, like your coil, cotton, O-Rings, spare glass, drip tips, tooling and literature etc.

You don’t get anything special to accommodate the design – it’s not necessary.

As a piece of innovation though I have to say this is truly welcome.

I’ve thoroughly enjoyed using it and have very few complaints.

If you enjoy both styles of vaping or you’re new to RTA’s and want to explore then this is a real boon for you.

I can’t help but feel OXVA have made a brave and innovative move with this and took an unnecessary risk but one that’s ultimately paid off.

They’ve built something here that performs its job admirably and doesn’t compromise on any flavour or leakiness in the process. It does everything they set out to do and probably more.

It offers you something truly different and provides an opportunity to carry a tank that can satisfy you whatever your urge.

It may have more midriff wiggle than Shakira, but the hips don’t lie – and neither do I.

And as for whether or not you even think this was necessary is also a matter of conjecture.

But now, as the gavel falls all I can say is well done OXVA, you’ve succeeded. Your arbiter has spoken.

If you want one you can get one from Healthcabin for $21.74 here.

HealthCabin is also one of the biggest vape wholesale distributors in China, if you’re a vape business owner, just contact them to get competitive wholesale price.

This review was written by Ryan from POTV(Planet Of The Vapes), click to view original review.