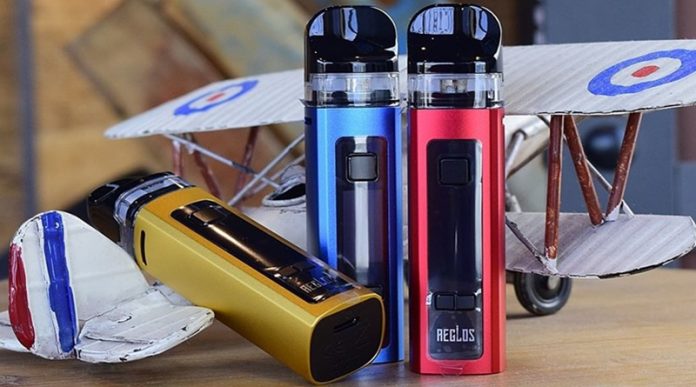 This pod kit was kindly sent to me for review by Sue from Healthcabin, Sorry for the stock Uwell pics…. been having tech troubles. Let’s get started the Uwell Aeglos Pod Review.

The first thought when I got this out of the box was ‘that’s so light’, so light I actually thought at first it was entirely made of plastic, even the body of the ‘mod’ section. A quick scrape with a knife proved otherwise and the body does appear to be an alloy of some description. I suspect the smallish 1,500 mAh battery is also keeping the weight down. While light, it’s bigger than I expected though, it’s not a small pod system.

As well as the device itself, inside the box there’s a type-C usb cable, (which is only about 7” long) a bag of O-rings and what looked like little black screws but turned out to be made of rubber, at the moment I have no idea what those are for, I’ll have to check in the manual. There’s a spare MTL coil (and a DTL coil fitted) and all the usual paperwork.

5 clicks and the device turns on. The display is clear and monochromatic, it shows the wattage, voltage applied when you fire the device, resistance of the coil (my 0.8ohm coil is reading 0.78ohm, so very close) underneath that is puff time (which resets after every puff) and finally puff count at the bottom. At the top there’s a small battery bar and a ‘mode’ display that shows that you are in ‘POW’ mode, short for power obviously. The only weird thing about that is POW is the only mode on the device. There’s no bypass or TC modes, so I’m not sure what the point of that is. The screen looks kind of dated if I’m honest. It reminds me of an old wismec screen from about 4 years ago. But this is a pod I guess, so I shouldn’t expect too much. There’s no menus to speak of either, the only other ‘options’ are to lock the device or lock the power with simple button combinations. It’s all very basic, which isn’t necessarily a negative depending on what you are looking for and your needs.

Moving on to the pod/tank or whatever you want to call it, there’s some good and some not so good here. The biggest plus is that you can actually see your liquid level easily, which isn’t the case on too many other devices of this type. The biggest minus is the mouthpiece which I just don’t find comfortable to use and unfortunately you are stuck with it. If you are coming to this from smoking cigarettes this is going to feel like sticking a sideways banjo in your mouth.

The other negative for me is the way the pod clips in, just two little plastic ridges on the pod. When you push the pod in there no reassuring click when it clips in, or a clunk from some strong magnets (which is doesn’t have). It just kind of pushes in and it’s in there. It’s weird and I don’t really like it. The pod is secure once in place but if it will be after pulling the pod in and out hundreds of times I have no idea, part of me suspects not. On the plus side spare pods are available for quite a low price, but you only get one in the box.

On the plus side the pod holds 3.5ml of liquid, which after vaping 2ml tanks for a while really does feel like a lot of liquid, filling is through a little self-sealing hole and worked really well too and there’s a little hole for the air to escape on the other side, not having fiddly bungs to take in and out is really nice, especially as a top fill that you only need to remove the mouthpiece. Overall I like the design of the ‘tank’ itself, there’s just a couple of things that could have been done better in my opinion.

The airflow control isn’t part of the pod but sits under it on top of the mod, it sort of works. I’ve said this before and I have no idea if it makes sense to anyone else (it does to me) but when you turn the airflow down it feels like you have less airflow but not really tighter. That’s probably because every other air path (including the mouth piece) is very wide, so when you close it down at the base, it just feels like there’s less air but it’s not really restricted like it would be in a MTL device. It doesn’t make for a nice or satisfying MTL vape, it feels a bit wishy washy with little to no focus on the throat hit.

That’s a shame too because I think this coil is in reality very good, with the right airflow I think the flavour and vapour production would be decent and more than acceptable for a pod. The MTL coil is rated for 20+ watts which as forum polls show, nobody MTL vapes at. I was using it around 15w which may have been contributing to the washy feel but I can’t vape this MTL at 20 odd watts, it’s impossible to take a draw longer than a couple of seconds. I’m giving up trying to MTL this and hoping for more success as a DTL device.

The DTL coil is a ‘UN2 Meshed’ 0.23ohm rated 40-45W, and at 45w with the airflow wide open it works better if you like that kind of vape. It’s not going to compete with a good old Kennedy or anything but I think it’s an acceptable DTL vape, not amazing but not bad either. I’m getting no dry hits and I’ve been hammering it pretty hard for an hour or so, the kitchen is proper cloudy. While the coil is holding up well the battery is taking a proper beating. The battery bar didn’t even move while I was using the other coil, now it appears to be depleting quite rapidly. I don’t think you’ll get anywhere near lasting a ‘working’ day vaping at this wattage. I ran it dry in a few hours.

Thankfully it does charge pretty quickly. Less than an hour for me if you can get that tiny cable to reach anything. The recommended charging power is 5v at 2A, which I used and it did get pretty warm, warmer than I would like ideally. It’s a good job that body wasn’t made of plastic.

I’m not really sure who I would recommend this to, it’s not a great MTL vape, It’s pretty decent as a DTL vape but 45w with 1,500 mAh battery just doesn’t add up for me, it’s very light but it’s not very small. The mouthpiece is odd to say the least. It has a good clear screen but with no menus or modes it doesn’t really need one. It come across as a slightly confused product to me, where some of the design choices don’t make a lot of sense. I still have no idea what the little black rubber things in the spares bag are either!

But….. it doesn’t leak, filling it is easy and not messy, it holds 3.5ml, coil and pod design are also pretty good… and you can see your juice level…. so if you really like the mouthpiece, like Uwell and want something very light to use as a DTL vape while you are out for a couple of hours then this might well do the job for you. DTL dog walkers maybe? I don’t think it’s a good choice for a ‘main’ device but like everything it may be perfect for some people and certain situations.

You can buy this device from Health Cabin. As always log in to your account for the best price.

Retail Only & Available for all Geekvape Products