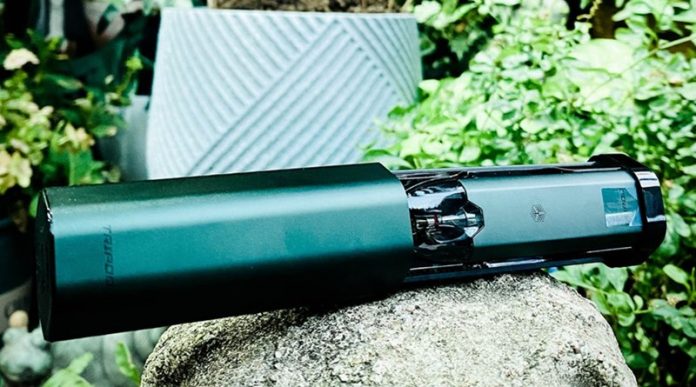 This was send to me for review by Sue from Healthcabin. Check out the Uwell Tripod Review below.

The Uwell tripod is an interesting concept, in the box you get a charger/case, the device itself, 2 spare pods (3 in total) a manual and a USB-C charging cable. We’ll get on to the case and the practicalities of that later, but I’m going to start with the actual pod device itself.

This little pod is tiny, about the same size as a disposable lighter. It holds a full 2ml of e-liquid and contains a 370 mAh cell. If this doesn’t sound like much battery life, that’s because it really isn’t. There’s no buttons and no USB port, which also keeps the size to a minimum. The Auto-draw works really well, only needing a light pull to activate and both the flavour and vapour production are very impressive for something so small. The pods contain a 1.2ohm coil and seem to have an excellent lifespan, I’ve been vaping this for over a week now and there’s no sign of flavour or vapour loss. If I was reviewing this on it’s own I wouldn’t have a bad thing to say other than the short battery life. It really is impressive, totally satisfying and dare I say it, it might well be the perfect MTL pod.

Unfortunately, it can’t be reviewed on it’s own because the case/charger is the only way to charge the device, which could be seen as a negative depending on how you want to use it. I’m always a bit cautious of ‘specialised and unique’ charging methods. You cannot plug a cable directly into the pod, so if you are going to a friends house and think “I don’t want to take anything big, I’ll just slip the little pod into my pocket and take that” and it runs out of charge you are stuffed. There’s no ‘can I borrow your phone charger’ get out, so you would have to take the whole kit with you. The battery in the device won’t last for vaping the whole 2ml the pod holds either, so you really don’t have the option to not carry the whole kit around. It’s a bit of an issue for me because it kind of negates the advantage of it being so tiny. You could just make the device a bit longer for a bigger battery and fit a USB socket to charge it and it would still be much smaller than the whole kit together. Maybe I’m missing the point here?

The case only has a 1,000 mAh battery too, so even if you don’t let the pod run right down, you won’t be charging your device more than a few times before the case runs out of power too. That is the biggest issue with the kit, it’s a good idea and if the case had a 3,000 mAh battery and was more of a ‘power bank’ it might make it a more attractive option, but 1,000 mAh isn’t enough. It’s almost like they’ve created the problem themselves by making the pod so small with a tiny battery, they had to design a portable charger to carry around with it to make it anything other than useless. I’m sure there are some specific instances where this would make sense and be the perfect solution, but I think for most people that won’t be the case. It certainly doesn’t make any sense as an all day device. It feels like all I’ve done this week is charge the case or charge the device.

The charger is an interesting design, there are rubber pads that push against the mouth piece end of the pods, both the spares and the one fitted to the device, this keeps everything secure and should stop any dust or dirt getting in the mouthpiece, which is better than carrying something around in your pocket with an open end. There’s a ring of lights on the (top? Bottom? Side?) that show the status of the battery in the case and they deplete when you put your pod in to charge it up. It will hold/charge the pod system and hold 2 spare pods, which is a nice idea (and it’s great that you get 3 replaceable pods included) but I can’t help think that space would have been better utilised with a large rechargeable battery. I’ve read reports of some leaking from the pods but it’s not something I’ve experienced yet, either in the device or from the spares in the case.

Overall I have mixed feelings about the Uwell Tripod, I love how it vapes and it could have been the perfect carry around device, but having to take the charging case with me (and having to find somewhere to charge the charger probably) makes it far less attractive, it’s not huge or heavy by any means but the choice of this set up or a small lightweight mod/tank that will last all day isn’t a difficult one and using it at home feels like a never ending charging adventure. I’m sure there’s a time and place where this would be perfect for someone but I’m struggling to understand what that might be.