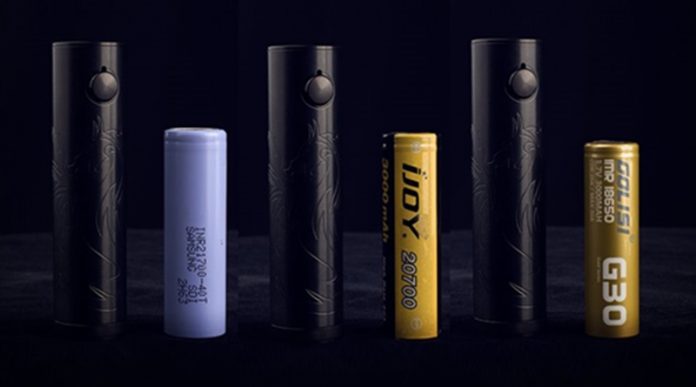 Disclaimer: This is an independent review of a device kindly provided to me by Healthcabin and is not associated with Planet Of The Vapes or any other organisation. The opinions here are purely my own and I am not receiving any payment or inducement for them. Now let’s begin the Vapefly Siegfried Mod Review.

Thank goodness for Vapefly that’s all I can say. Where would we be without them?

Not only are they a proper company making proper tanks and RTA’s, they’ve now only gone and brought out an old fashioned stick mod!

It’s not even as if Vapefly are old school themselves. They’re one of the brightest, most advanced, most revolutionary, boldest and most inventive manufacturers out there. You only have to look at their outstanding range of tanks and their 200w Kriemhilde mod kit to know that.

So why go back to the past? Why roll back the years and launch a regulated stainless-steel stick mod kit on us? They must think there’s still a market for it, they must reckon there are enough people still into nostalgia to make it work, and I reckon they’re right. There is one with me. Perhaps a few others will cotton on now too?

Making mods isn’t exactly alien to Vapefly though, but they’re not primarily known for it.

This is a company more primarily famed for its supreme atomisers and wicking cotton rather than its hardware or pods so what on earth possessed them to do this, and in particular what possessed them to look retrospectively and make a regulated stick mod, going backwards rather than forwards?

It would’ve been easier for them to bring out another big box mod or small pod to keep their foot in the door but they did nothing of the sort.

This is a throwback to something people no longer use. This is a barely adjustable semi-mech, not a step forward.

So here we are, a company almost exclusively known for its atties, bringing out something old-schoolers, metal and machining fans will love but not the prosperous plastic posers.

It’s not as if simple stick mods ever became obsolete technologically though – they work just fine and they’re extremely comfortable in the hand – they were just deposed by fashion and manufacturers realising they could turn vaping into the disposable razor industry and lock people into their own consumables ecosystem.

That’s not to say others aren’t manufacturing individualistic parts too, but Vapefly are at the forefront of it, and seem to feel that as vaping moves more and more towards the consumerism sphere it will leave some more space with the mix and match crew.

It’s not like this is a phenomenon just restricted to the MTL market either.

It’s happening to the DTLers too. And predominantly being a tank making behemoth specialising in this area, Vapefly know this.

So what started out as a trend for low-level tootlers and beginners has now morphed into a trend for the whole industry, and even the cloud chucker’s have been inhaled – and the trend towards manufacturing pod systems is now undeniable.

The German 103’s have had a really big hand in this one and done another fine job.

As I’ve only been provided with the tank-less version of the mod all I have to discuss here is the design, machining and how various atties will work on it – and as far as I can see, this is all top notch.

The milling is smooth and the single button for firing and power is firm and clicky and you even get a tri-colour LED power indicator surrounding it that looks high quality, and how often do you get to say that about an LED?

As a locked variable voltage unit, it means the vape levels are based on ohm’s law and the rating of the coil fitted.

This gives you the opportunity to play it safe and use a basic pre-made coil, or study the science and build your own – this is entirely down to you but you better know your stuff if your going to do the latter, but there are enough protections in place for you not to blow yourself up along the if you mess it up

It really is as safe as houses and despite being able to take three high powered batteries – 18650’s, 20700’s and 21700’s – its bypass mode and tri-colour LED battery power illumination will keep you safe – and with only three voltage settings – 3.8, 3.4-to-3.8, and minus 3.4, there really is no chance of any harm coming to you. This is no true mech despite the styling paying homage to one.

While the power choice may be limited, the choice of tanks it can take certainly isn’t. With it’s 25mm diameter it can take almost anything you want and the mod itself is so beautiful it will suit almost anything too. With its classy choice of Gunmetal, Stainless Steel and Black colour schemes you’ll have no trouble finding a match to suit your style in any sense.

The CNC engraving on the side is an even nicer touch and just adds to the feeling of quality. There’s certainly nothing wooly here, this is high-quality engineering.

There’s always been a few dual or tri-power beginner kits on the market, but none of really true quality and precision engineering. That’s been left almost exclusively to the minority mech market.

Some of the very old kits are still produced like the Uwell Nunchaku and Ehpro D101, but new launches are very few and far between, and that’s why I’m so happy about this one. A brand new regulated 99.2 x 25.2mm, stick mod. Perfect. Right up my alley.

I’m as happy as a piggy in a puddle

It’s not actually as if this mod is even perfect – it isn’t. It’s not even completely to my liking either, it only has three uncontrollable power levels, but it’s the gesture towards a nostalgic past that’s so welcome here and that’s what makes me happy above all, so I’ll take it.

When was the last time you really saw a new regulated variable wattage stick mod?

It must’ve been a long time, surely?

You don’t get anything in the way of peripherals like USB cables or spare O-Rings or glasses here either – it’s just a battery housing with external charging after-all so all you get is a simple box with your warranty card, user manual and an adaptor for your 18650, but to be honest that’s all you really need.

But like I said earlier, this is a basic mod for basic people, and the sort of people who buy these are just fine with that. These people are not show offs, they’re enthusiasts who like showing off…

This really is more of an upgraded starter kit than a cylindrical mech – just a very classy looking one with a multitude of multifunction protections – short circuit, reverse battery, over-current, high temperature, 10 second cut off and a nano coated 3S chip to protect it!

So, all in all what we’ve got here is a basic, old fashioned stick mod with some truly sublime design and machining – or to put it more bluntly, what we have here is pretty much a mech for nincompoops – or a fashion statement for beginners… take your pick.

If you’re into your fancy gizmos and displays you can forget it here, this really is just old school machining, wrapped in a stylish mech design with simple push button operation, variable battery support, a 510 connector for accommodating most atties – including Vapefly’s very fine own range, and some very high quality engraving to make it look even higher quality than it is – but bizarrely this also sitting very happily between two very different camps and will appeal equally to both.

You can go to town at the sharp end with your fancy drippers and RTA’s, or you can keep it simple with a basic stock-coiler and look equally as good with either.

So thank goodness for Vapefly going out on a limb and showing the history of vaping isn’t quite dead yet, and – long may it – and them – continue.

If you want one of these you can get one from Healthcabin for the pittance of £27.89 and you’ll get a further 30% off by logging in. New customers can even get a further 10% off on top of that and you can’t say fairer than that now can you?

As you may have gathered, I’m extremely fond of this mod and if this is your sort of thing I’m sure you will be too – so enjoy it! I know certainly will.

This review was written by Ryan from POTV(Planet Of The Vapes), click to view original review there with more photos.