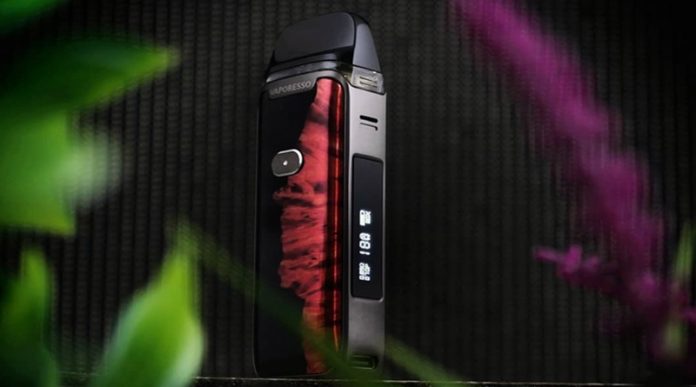 Sue from @Healthcabin sent the Luxe PM40 over for review, Get yours here for the great price of $22.30 once you are logged in, if you dont have an account go and make one as you will save a fair bit. Now let’s have a look at the Luxe PM40 Review.

The device comes in a nice sturdy box and outer removeable sleeve with a picture of your chosen device on the front on the rear are the specs contents and scratch and scan authenticatation.

The Luxe device comes in a choice of 5 colours which are Black, Silver, Jade, Carbon Fiber, and Lava which is the one i was sent.

Once you get the device out of the box there are a couple of clear film covers over the panels and one on the screen to remove.

The PM40 is powered by the Axon chip, has a nice curvy form and is constructed from zinc alloy, it feels pretty lightweight but is quite chunky as it holds an 1800mah battery , it fits nicely in your hand and feels well built and solid pretty similar to the Smok Nord in design but much better quality.

To power the device on and off its the usual 5 clicks of the fire button which you will find on the front of the mod its responsive and clicky , by default the fire button is locked as a wattage adjustment button so when pressed it fires the device, this status is also shown on the screen with a locked padlock, to unlock quickly press 3 times now instead of the button firing the device each press increases the wattage in 1W increments, holding the button down speeds it up.
Adjusting the wattage once you reach the maximum 40 watts it circles to the minimum of 5 watts, you only have the option to increase wattage and not decrease, so as an example if you are at 18watts and want to go down to 14 watts, you have to either click or hold the fire button down to 40Watts then start at 5 watts and keep going until you get to 14 watts bit of a pain but not a deal breaker.
On the edge of the device is the 0.69 OLED Screen which is nice and clear and easy to read it displays coil resistance, puff counter which goes up to 999 puffs then goes back to 000, wattage, battery level and battery % when you fire the device it replaces the puff counter with a puff timer.

The device is fitted with Turbo boosting tech similar to the buck boost system so if you notice any drop in power at all it will only be in the last about 10% of the battery life up until then you will get stable wattage.

Charging the device is simple just plug the cable into the Type C USB port and wait about an 90 mins and its fully charged, so i would say its more of a 1.5A charge and not the 2A stated it also supports pass through charging.

The Luxe PM40 has a clear pod with frosted bottom section, (e-liquid isn’t stored in this part), a black mouthpiece which you remove to fill the pod, ive found this to be a pain if you have slighty greasy E liquidy fingers as the mouthpiece is really smooth you just cant get a grip on it to pop it off so to old rubber glove came to the rescue, once its off filling the pod is a doddle theres a round fill port hole with self sealing silicone membrane making it a mess free easy job and although the hole is quite small it takes most shortfill bottles easily except the chubby tipped ones.

On one of the pods supplied in my kit the membrane was split and every puff i ended up getting a mouthfull of juice so i ended up folding a bit of kitchen roll up and sticking it over the hole to try and fix the problem all that happened was the kitchen roll soaked up the juice and i ended up throwing the pod in the bin the other one luckily worked as it should.

The Luxe PM40 uses the GTX PnP style coil heads, which are push fit make sure the straight edges are lined up with the front and back of the pod and rounded edges to the sides or they wont go in.

The coil heads included are different from the previous 0.6ohm and 0.8ohm GTX coil heads having an extra O-ring lower down. This gives the coil head a total of 3 O-rings and the e-liquid only stays stored in the top section of the pod where it wicks the coil head, the lower section between the 2 bottom O-rings has a self-circulation system which recycles escaping e-liquid rather than it escaping into the pod bay which Vaporesso have named Quad protection the improved leakproof system and after a while you will start to see liquid in the bottom section of the pod so it definatley works and i found no leaks at the base of the coil just a tiny bit of codensation.

The pod itself just inserts into the top of the device and clicks into place and stays firmly put.

Airflow is adjusted with a sliding lever on the rear of the device moving it to the right opens airflow and to the left closes it down to suit your preference but being honest it doesnt make a massive difference.

This review was written by Rob from POTV(planetofthevapes), click to view original review.