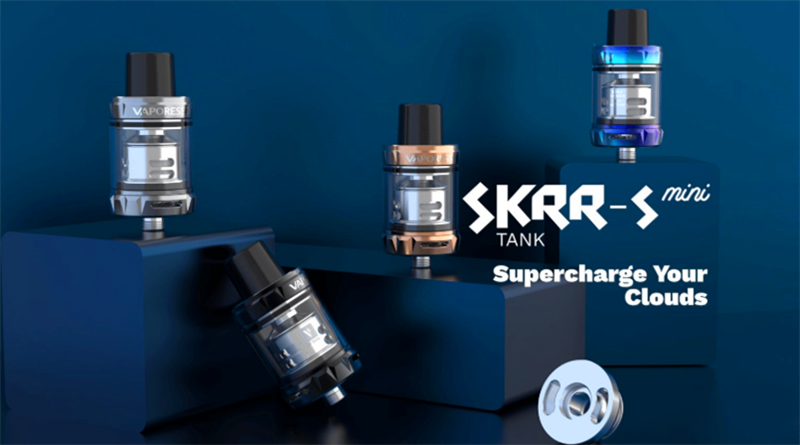 Hi peoples. Just recently I was sent the Vaporesso SKRR-S Tank for review by Cortana from HealthCabin.
This tank which boasts a decent 8 ml capacity utilises the QF mesh coils which are also used in the SKRR Tank. It comes with the usual extras such as 4 spare o-rings of various colours, a spare tank top section seal, a 5 ml replacement glass, a .2 ohm mesh QF coil as well as the .15 ohm QF Strip coil and a large black silicone sleeve, which I call the Mask, for the 8 ml glass. 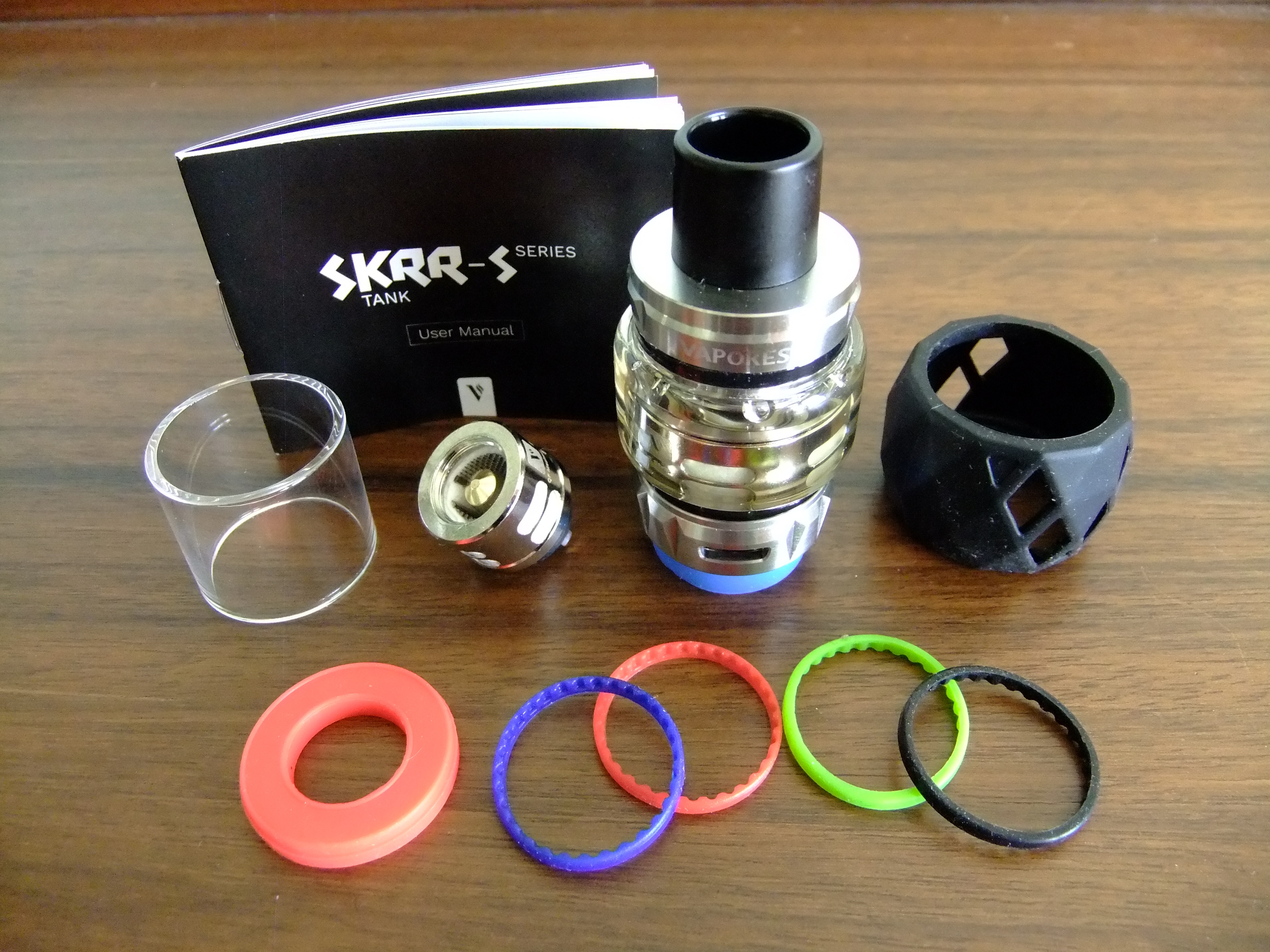 The tank itself has a large appearance, though it’s virtually the same size height wise as many others, but this is due to the fact that it has a decent sized tip on it. Air flow is delivered via 3 vents in the base delivering a decent semi restricted air flow. I say semi restricted as there are some tanks that deliver more open unrestricted air flows such as the T2 tank and Naboo but this is not as restricted as some others.
The fill system I was happy to see utilises the older style screw top. I know plenty out there like the sliders but personally after using both my preference is these days for the screw tops. They will not open inadvertently in your pocket and you can clean the entire perimeter of top and tank section so that when resealed there is zero weeping which you just cant seem to eliminate on some sliders due to some residue being under the slide system that you just cannot reach to clean away. The top seal on the SKRR-S is a beauty. Its large and seals completely against the flat top fill section of the tank. The fill port is a single large kidney shaped one that has a slightly angled inside edge which stops most of your bottle tips from being able to be completely inserted. I say most as I do have one with a very thin tip which actually gets caught in it at times. It is a bit narrow the fill port and I had some initial concerns to be honest that this would cause some overspill situations but to date there has been none for me at all. Is it possible though with high VG juices it could? Well I tried full 100VG as an experiment and it was fine, no issue at all. 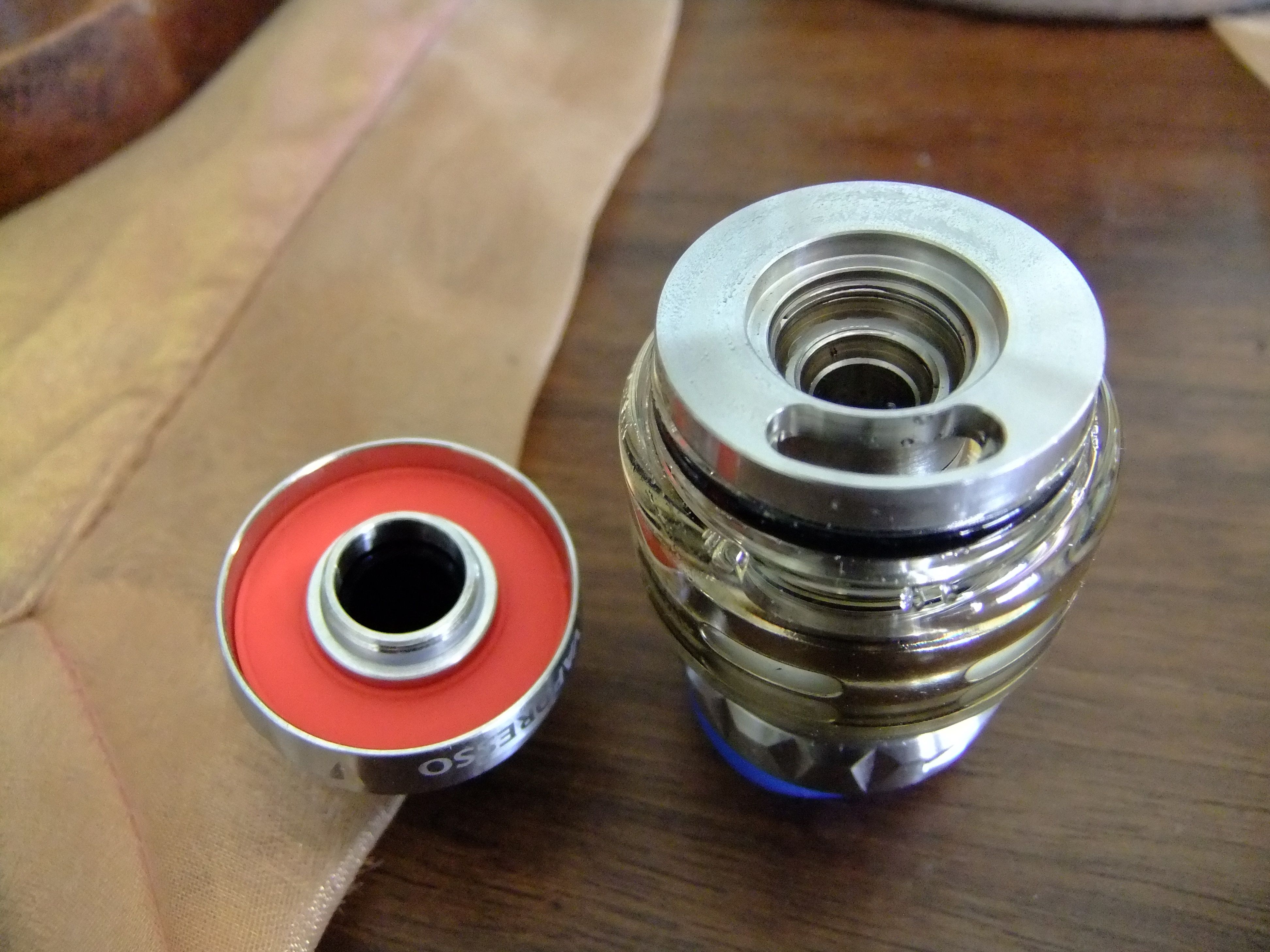 The drip tip, well it appears nothing out the box so to speak being just a plain black tip. But one thing has struck me about it. It stays very clean compared to the resin types I have used in the past and more recently. In fact it reminds me of a non stick frypan in ways as when watching a game of your favourite sport and having a beer or two with some chips and vaping away, at the end of it all you might need to give the others a clean after some over enthusiastic cheering and vaping and eating. But this thing just stays clean as a whistle. Interesting!
Below the SKRR-S showing that slick tip and sporting it’s Mask! 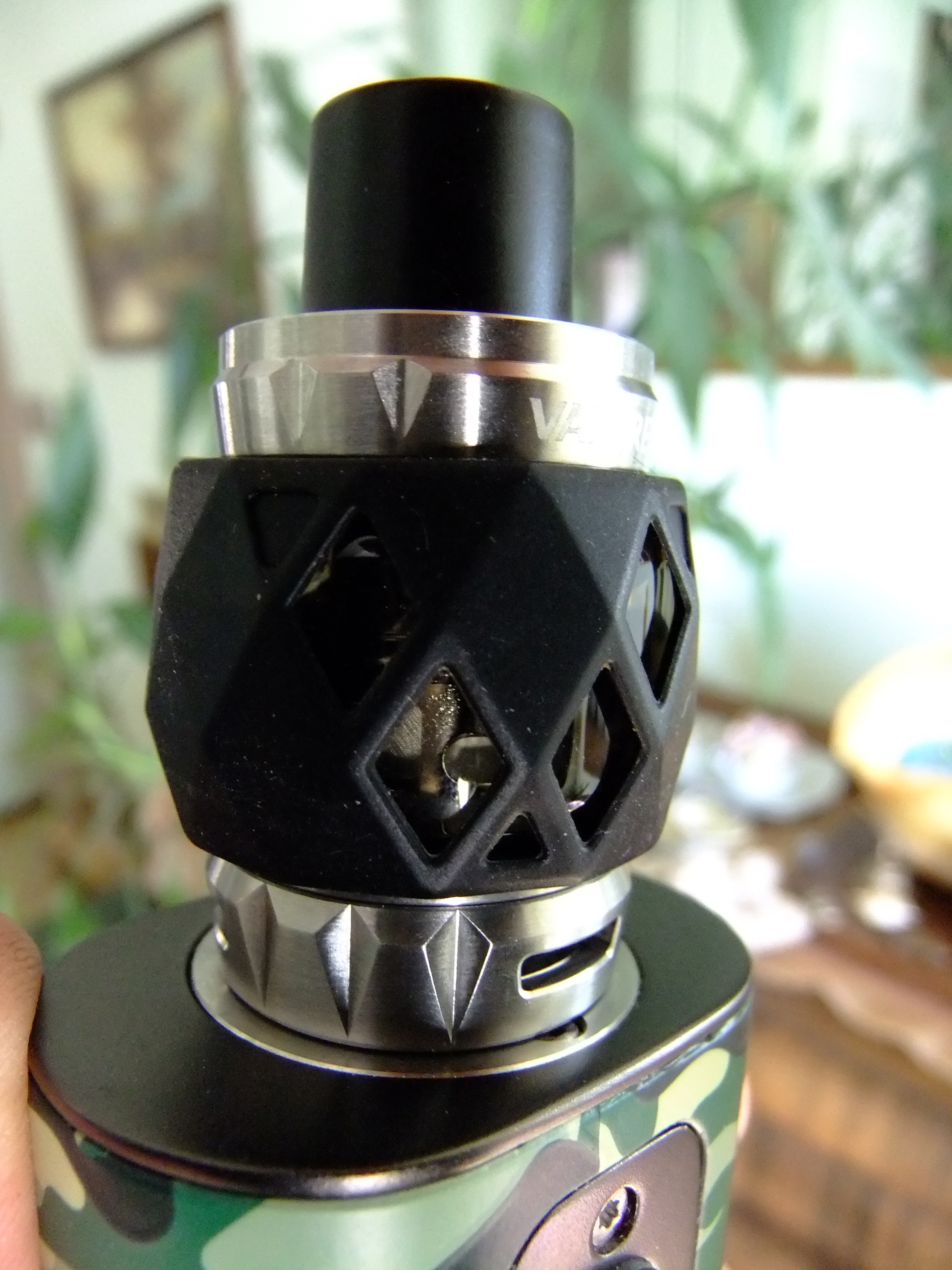 The coils.
As many who have used the previous version of this tank will know, the coils wich fit both the previous SKRR and this newer SKRR-S, incorporate in the centre of the coil where the air travels up into it mixing with the vapourised juice, a bullet shaped centre. The air travels or passes out the sides of this head instead of straight up virtually eliminating spitting. At the base of them too is a tiny moat style resevoir that catches any excess juice which makes its way down to be reused in vapourising. This system is used to eliminate coil leakage. So in regards to both, spitting and leaking, I can say I have not had any issues with either. The vape is smooth and clean and having 8 wicking slots it wicks fast. I never had one dry hit. 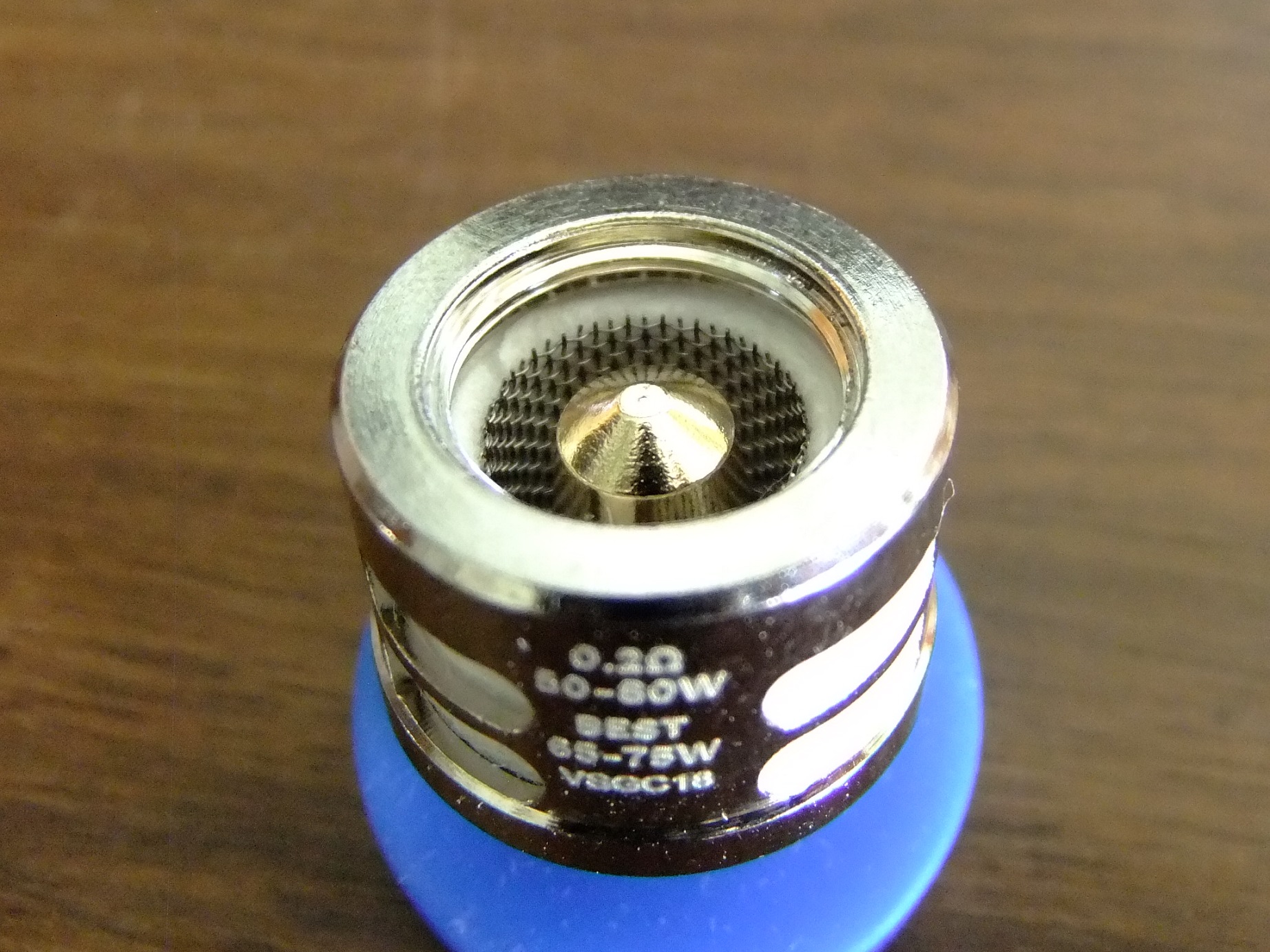 Capacity.
Ok, so the SKRR-S tank with it’s supplied and fitted bubble glass is stated to have an 8ml capacity. Now the inner Geek in me got curious and decided to put this to the test. I used a medical syringe and drew exactly 8ml of vape liquid into it. The tank was dry but fitted with a fully saturated coil.
The results. Filling the tank to the point where one would visually see the tank looking full from the side view it took 5ml of liquid. Filling to the brim of the kidney shaped filler took 6ml. Now given that most people don’t fill to the brim, which by the way is generally not recommended as this is often the sure fire way to create coil over saturation, one would have to say that the capacity of this tank is grossly overstated. As far as I am concerened it’s a 5ml tank. About the only way I can see it achieving the stated 8ml would be with the top section of the tank removed from the base, inverted with no coil, and filled. So technically in that way it would be an 8 ml tank. Hmmm.
Below the SKRR-S on the VSticking VK 530. 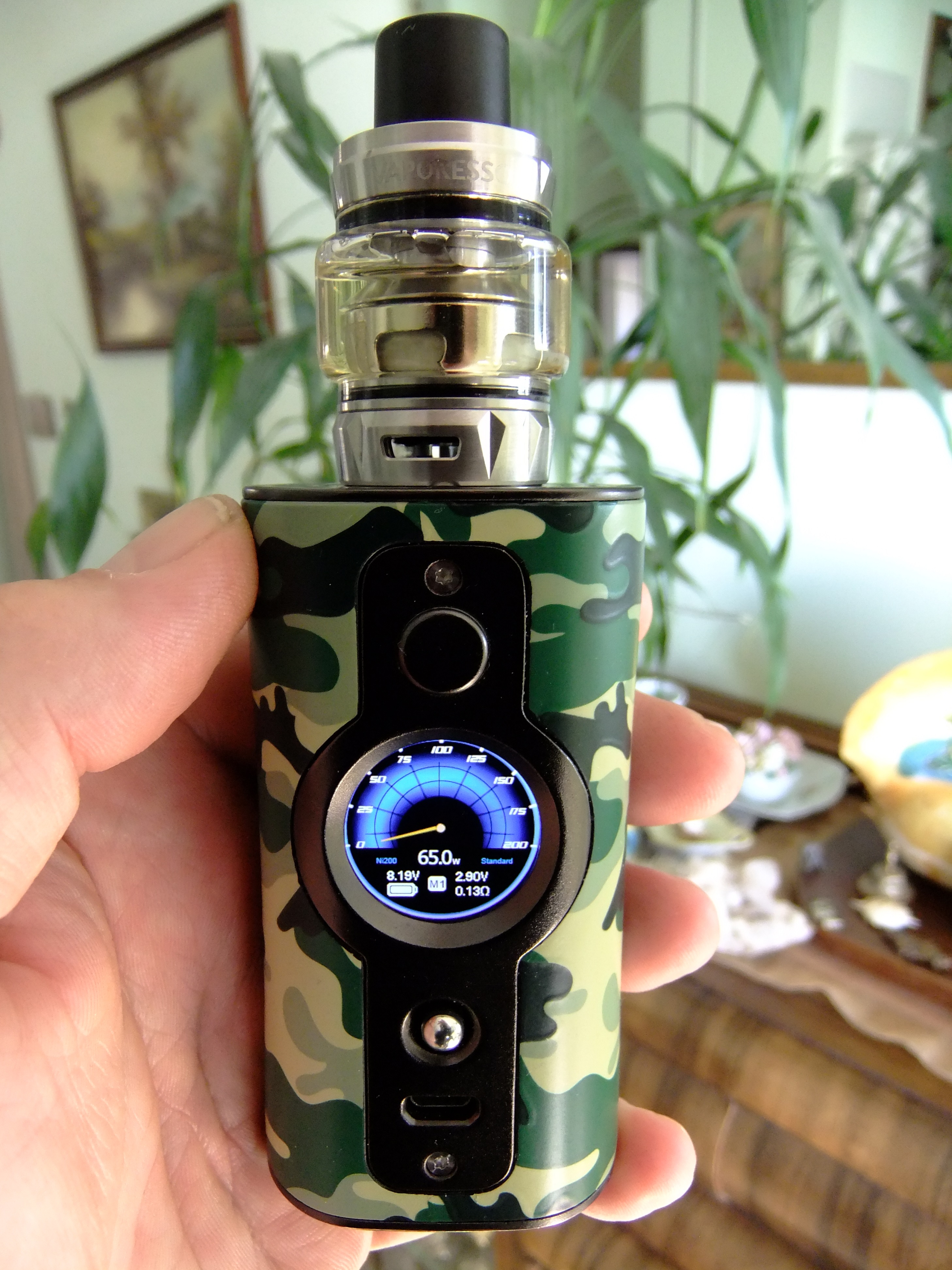 The Vape.
The SKRR-S as stated earlier comes with 2 coils. One being the QF Strip coil of .15 ohm and the other a QF Meshed coil of .2ohms. The strip one actually looks like mesh, just a different shaped mesh visually. First up I tried the Strip .15 ohm. This coil is stated to be designed for longetivity over flavour so I wasn’t expecting it to deliver an out of this world flavour but was curious as to what type it did deliver. To cut to the chase I found it’s flavour and vaping experience overall to be a little on the dry side to that which I’m used to. The Vape itself was very smooth and clean though and I wondered whether this dry and slightly subdued taste was the result of the bullet shaped air deflection with reduced spit back. I say subdued as I personally have found dryer type vapes to have a slightly reduced flavour to the wetter or moister types. Anyway, I was looking forward to using the next coil, the .2 ohm mesh which is stated to be for flavour. So after 10 days of using the Strip coil and 80 ml of Strawberry custard DIY with 12 drops of Purilum SS in 100ml mix I decided to see the difference between the Mesh and Strip versions. Upon inspection of the strip coil when removed it was obviously near its end anyway as the mesh Strip was starting to darken along with the wicking material in contact with it.
Well after the usual break in procedure and after a couple of tankfuls I put it to the test. To be honest I had difficulty picking much difference between the Mesh and Strip coil flavour wise. The experience to me was virtually identical. The Vape was smooth and clean with that dryer type style and with the overall flavour on par with the Strip coil. Others may be able to pick a difference but honestly I was unable to.
Cleaning of the tank is relatively easy with the only difficulty presenting itself being the undoing of the the base from the mid section. Using a rubber glove on the hand holding the mid section gives a good enough grip with it coming apart easily with the use of it. This allows you to get a nice grip on the thin metal section of the top of the glass without placing unnecessary pressure on the glass itself.
Below the SKRR-S on the Espion Mod. 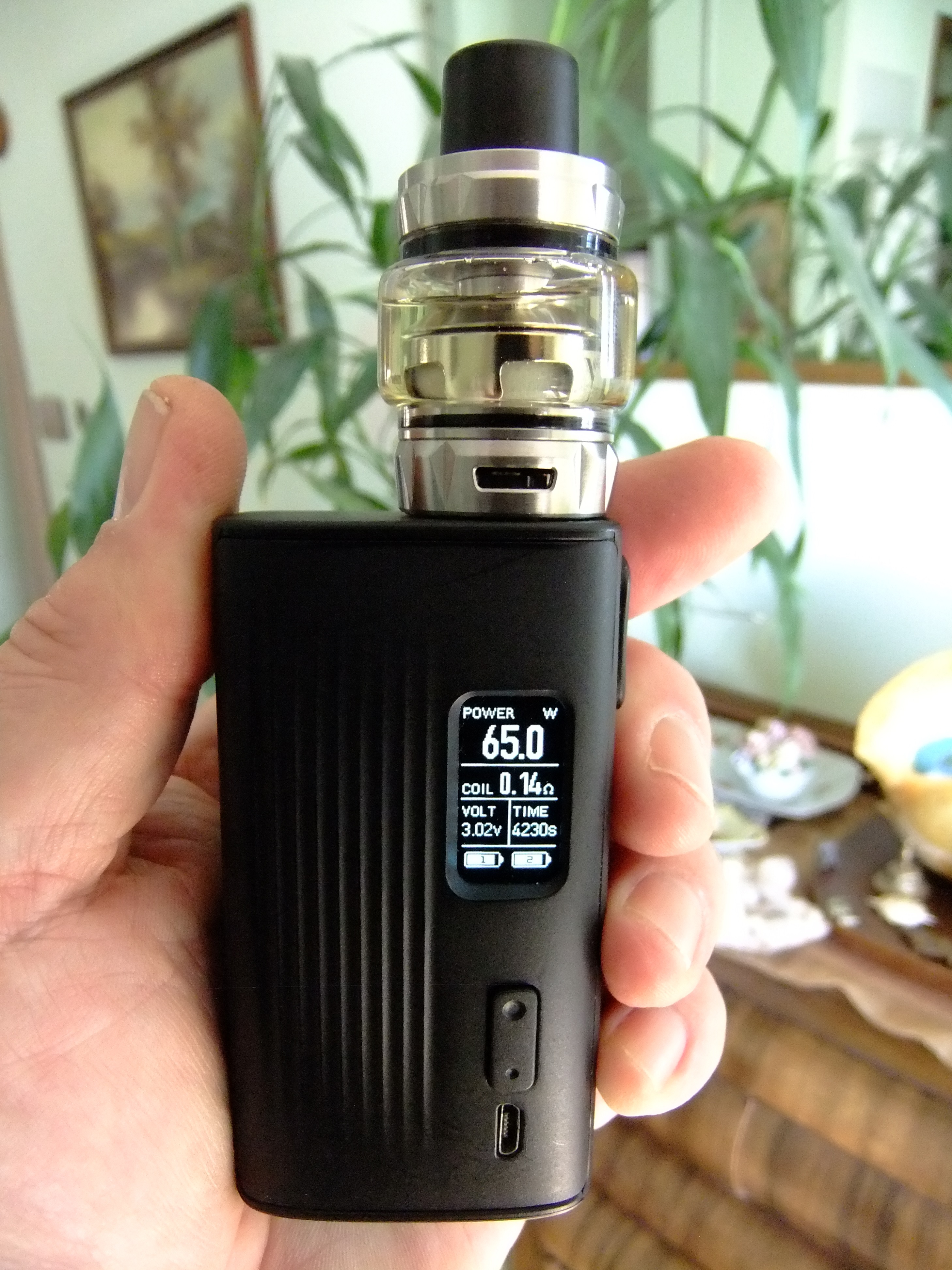 To sum it up.
I do like the cleanness of the drip tip and the screw top filling. Filling is no mess and the coils seem to last as well as your typical mesh coils using sweet juices. Air flow is pretty good but a little less than some. Juice capacity is definitely overstated, it’s not an 8 ml tank. Juice consumption is on par with most other mesh coil tanks, but it’s definitely not a juice pig. Flavour is ok to good but a little on the dry side which I put down the the centre of the coil bullet head design. There are those I know of, and have heard of, that actually like a dryer type of vape though so for them this tank and coils would be right up their alley. Overall build qaulity of the SKRR-S is very good and solid.
Many thanks again to Cortana for letting me try this tank out.
Cheers all. 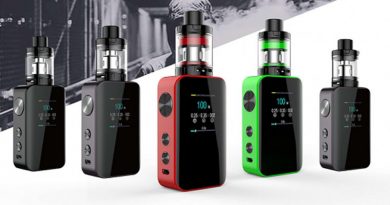 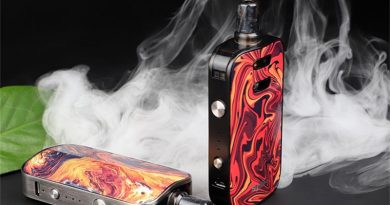 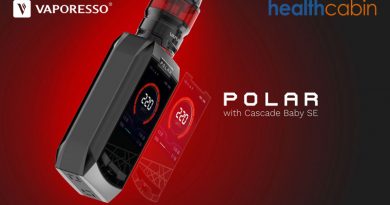