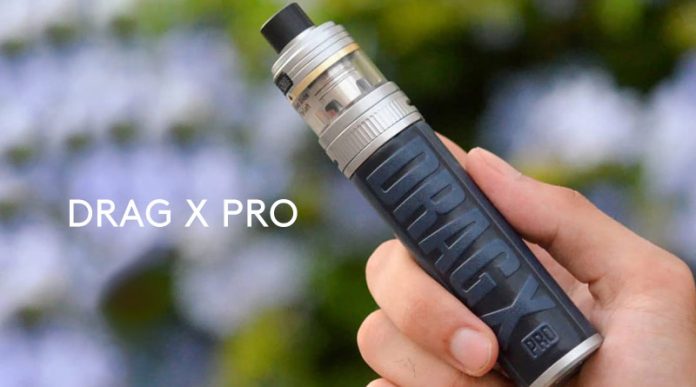 It’s a new year, that must mean it’s time for Voopoo to release another ten versions of the Drag pod system – today’s version is the Drag X Pro – an 18650/21700 pod-mod, with an all-important boost chip, the new TPP X-Tank and compatibility with previous PnP pods/coils.

To answer the question in the title for those who prefer a quick review: Yes, it’s a worthwhile upgrade to the original.

What do you get?

Looking at the Drag X Pro, it’s a 21700 version of the Drag X – so, obviously it’s similar but bigger – but upon closer examination, you start to notice a few differences:

Overall, it feels just like the original Drag X – reasonably solid and ergonomic.

Firstly, this looks so much nicer than the original TPP tank that came with Drag 3 kit – it’s still attached magnetically, but it looks and feels like a real sub-ohm tank, rather than a cheap plastic pod.

It does take 810 drip-tips, but it doesn’t have internal O-rings for the drip-tip, so you’re going to need a non-standard 810 that has O-rings if you want to swap drip-tips.

It has top-fill (or more accurately side-fill) for juice, with a slightly weird but nice system, firstly you hold in a little button on the side of the tank, this allows you to rotate a ring to expose a rubber tab – it’s not as quick as just having a rubber tab, but it looks far better and is probably less likely to leak.

Apart from the above, it’s a pretty standard tank – coil goes in the bottom, airflow adjusts on the mod.

There are a couple of features lacking that were on the original Drag X:

There is no temp control mode out of the box, but there is a software update that will add temp control – but I don’t use temp control and I don’t like to update mods unless totally necessary, so that’s something I won’t be doing.

Voltage boost. The mod will boost up to 8.5v which was one of my main complaints with the original Drag X – I won’t praise Voopoo for listening to the public and addressing this issue, this is how it should have been done in the first place.

The airflow control is easier to adjust than on the original Drag X, and it has a surprise – as per usual you rotate the ring to gradually open/close a large slot, but once you completely close the slot, you have an MTL airflow hole on each side. This is totally unsuitable for the coils provided, but if you use the PNP MTL pod then it could be useful. Maybe there’s going to be a TPP MTL tank in the future.

I discovered this by accident, but it has autodraw. Someone can correct me if I’m wrong, but I thought the only Drag versions with autodraw were those with internal batteries?

But…it’s not sensitive enough. With airflow fully open you struggle to activate the autodraw function, and when it does finally work, it’s going to cut off halfway through the hit. Closing down the airflow makes it work much better, but that’s not the point – it should just work and it doesn’t.

The Drag X Pro is backward compatible with all (that I tried) pnp tanks – the TPP X Tank won’t take pnp coils, but you can put a pnp pod into the Drag X Pro and use pnp coils that way.

I did also try a 510 adapter to see if performed a little better now that it has a voltage boost function – but not really, the voltage drop is still huge and makes it a pain in the ass to use. I can’t really blame Voopoo for that, they have the Drag X Plus Pro with a 510 connection, so just get that if want to use it as a regular mod.

Both of these coils are very much DTL and do well with the airflow fully open.

There’s nothing wrong with either of these coils, but I’d love to have seen them give a restricted DTL coil such as the 0.3ohm DM4 coil with the kit, as the two supplied coils are quite similar.

Compared to PNP coils – the TPP coils are much better. I can’t imagine many people using them, and then going back to PNP.

The Voopoo Drag X Pro was provided for the purposes of this review by Healthcabin who currently have it in stock for $37.99. In addition to catering to end users, HealthCabin is also one of the biggest vape wholesale distributors in China, if you’re a vape business owner, just contact them to get competitive wholesale prices.

This review was written by Owen from Vaping Underground, click to view original review there with more details.