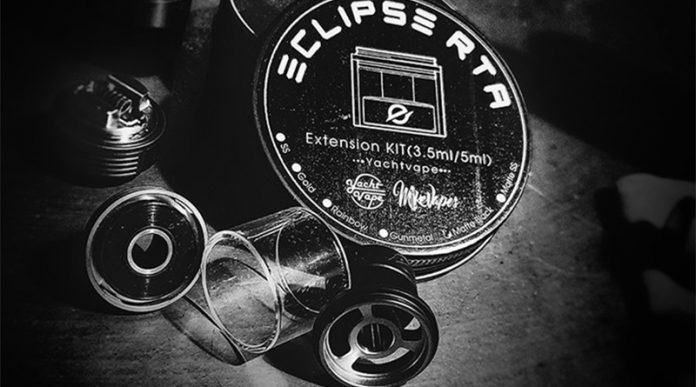 Late last year I was lucky enough to be sent the Yachtvape Eclipse rta for review by our friends over at Healthcabin and this turned out to be one of my favourite atomisers from 2021 with a rich, flavourful restricted direct lung vape. I was also interested in taking a look at the Eclipse extension kit but unfortunately this was out of stock at the time, however Healthcabin have now sent this over for a brief follow up review. So let’s get started the Yachtvape Eclipse Extension Kit review then.

The extension kit comes in a small metal tin and contains a replacement chimney section in your chosen colour with a straight glass installed plus a bubble glass. These are all securely nestled in a foam pad within the tin for transport.

The replacement chimney section is used as a direct replacement for the one included with the Eclipse rta, this is 3mm taller than the original but retains the same slammed chamber which I believe is at least partly responsible for the superb flavour coming from this teeny rta. Simply remove your original chimney section and glass, replace it with this new section, and then put your top cap on and you’re away.

So what benefits does this bring and are there any downsides?

Those extra 3mm in height bring an additional 1ml capacity with the straight glass, bumping it up from 2.5ml to 3.5ml, and the bubble glass gets a similar increase in capacity from 3.5ml to 5ml. Whilst the Eclipse rta isn’t a particularly thirsty tank, the default “2ml” straight glass (which is actually more like 2.5ml) can be a bit of a pain, particularly whilst you’re out and about, so the sudden bump to 3.5ml is a very welcome addition. More importantly, the vape quality remains just the same as it was before.

One mod I wanted to use the Eclipse rta with when I first received it was the Vapefly Brunhilde SBS but unfortunately with the standard glass it’s actually a little too short to be practical, the increased height on offer with the extension kit means that this is now a perfect match. As an added bonus there’s even room for the bubble glass which meant that my capacity jumped from 2.5ml to a whopping 5ml. This meant I got all the way to lunchtime yesterday before I had to refill the tank, bonus!

If you already have the Yachtvape Eclipse rta, then the extension kit should definitely be on your radar, the increased capacity doesn’t affect the performance at all and makes this a bit more practical for day to day use. As an added bonus, the tin it comes supplied in is a great place to store your original chimney section as well. It’s just a shame there isn’t quite enough room in there to put three glass pieces in at once as this would then become the perfect storage tin for the Eclipse rta.

Many thanks to Healthcabin for sending the Eclipse extension kit out for review.