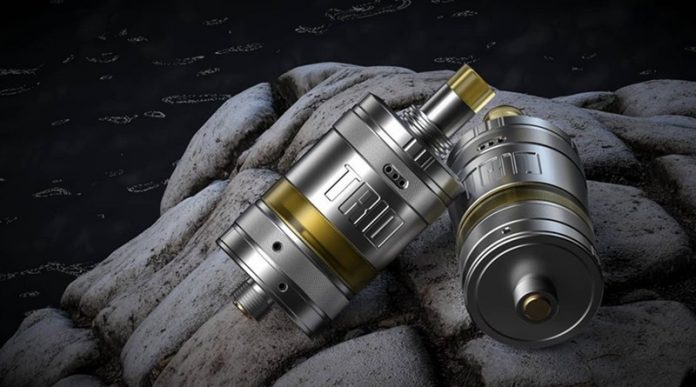 Contents hide
1 Introduction
1.1 Box Contents
1.2 Specifications and Features
2 Aesthetics
3 What You Receive?
4 The Airflow
5 The Deck
6 The Build
7 How It Vapes? And Thoughts!
8 Likes
9 Cons

Hi friends. In this review i take a look at the Trio MTL RTA from ZQ Vapor, which was supplied for the purpose of this review by the Healthcabin. Let’s check out the ZQ Trio MTL RTA Review together.

ZQ Vapor are quite a new brand and have their products manufactured by Aspire which appears to be a great Move. They are proving to be quite diverse releasing a couple of quality pod systems followed by a DNA 75C device and now this an innovative MTL RTA.

The Trio’s main talking point as the name suggests is its triple airflow, top, middle and bottom which can all be adjusted independently giving a total of 143 different possible combinations. The diverse RTA offers anything from a semi tight MTL up to a semi restrictive DL and comes with both a narrow and wider bore 510 drip tip.

Coming in 3 different colour options all with matching Ultem upper drip tip sections and tube let’s check out the Trio!

The Trio MTL RTA came in simple cardboard packaging with a picture of the RTA in the chosen colour on the top of the packaging. I received the Gunmetal colour which i must say looks very handsome and i would consider it more the DLC finish we saw with the Pioneer RTA! The options are Stainless Steel, Gunmetal or Black, all versions come with a pre-installed narrow bore 510 drip tip with bottom section that is colour coded and Ultem top to match the Ultem tube!

The top-cap and bottom AFC has matching grooved knurling and then the top AFC and upper lower AFC have matching heavy knurling. As mentioned we have an Ultem tube which is quite narrow as it screws to the main sleeve section which has “TRIO” carved into the metal.

Moving to the base we have branding, safety marks and a serial number, the 510 is Gold plated and protrudes slightly so not enough that i feel comfortable saying it will be fine on a mech device!

As well as the Trio MTL RTA with 510 narrow bore drip tip pre-installed you also receive a matching wider bore drip tip. As well as the usual paperwork you will also receive a bag of goodies which includes a flathead screwdriver as well as spare O-rings and grub screws. Also in the bag we get 2 shoelace cottons and 2 2.5mm ID coils. There are no detailed specs given for the coils but one is a braided 0.8ohm coil and the other a 0.5ohm fused Clapton.

Up top we have a 510 fitting drip tip with narrow bore but you can also swap for the included wider bore 510 or fit one of your own if you prefer! The top-cap has very smooth threading but i much prefer either a bayonet fitment or short threading, the top-cap takes quite a few turns before it’s off which makes filling more time consuming, far from a deal breaker but still a con for me! Once off we have generous size deep sitting ports which seal well when secured.

We then have the top airflow control ring that can be removed and the sleeve unscrews from the fill plate/chamber section. The sleeve comprises of the top two thirds being metal and then a narrow ultem tube. The tube does screw onto the metal section and also has an O-ring seal but i would keep separating the two sections to a minimum as PEI to metal threading is not the best combination when it comes to durability.

The fill plate/chamber section has a small slot allowing air to the chimney when operating the top airflow, the chamber itself is domed and beautifully machined! The base section screws to the chamber section and seals the bottom of the tube with an O-ring, once again the threading is very smooth. The base section comprises of the deck and 2 further AFC’s for your middle and bottom airflow adjustments!

The airflow or should i say three airflows on the Trio shows some innovation and is it’s main talking point.

The top airflow is not top to bottom as we see on many RTA’s but just introduces air via the top airflow inlet directly into the chimney so has no influence on flavour but simply adds more air. We have a small slot and then 3 1.0mm holes on the AFC so we can have 1, 2 or 3 holes open, alternatively it can be completely closed.

The middle airflow is more directed at the lower sides so more a bottom/lower side airflow and we have 5 holes on the side of the base which are 0.8mm, 0.9mm, 1.0mm, 1.2mm and 1.5mm in size and a 1.5mm hole on the AFC which can be lined up with any of the 5 different sized holes or again can be closed altogether. The air get’s channelled up through the post sections and out through the small slot on each post directed at the lower side sections of your coil.

The bottom airflow has a further row of holes below the row for the middle airflow which are all the same size and an identical 1.5mm hole in the AFC so is adjusted in the same way with the same options. The air gets fed underneath the deck and out through the 1.5mm outlet positioned directly underneath where your coil will be positioned.

All three AFC’s have stoppers and move just enough to choose the airflow options or to set closed. Not sure how someone with chubby fingers would get on with the two lower airflow adjustment rings but i found no issues with adjusting them independently even when on my device!

The deck comprises of a post either side that has a raised section which accommodates the side airflow outlets and lower section which uses large flathead screw heads as clamps to fasten your leads in position.

The weird thing is about the deck is we have outer lips on the posts to trap your wires when fastening down but i just can’t see anyone setting a coil in this with the leads to the outer side of the screw heads, spacing coils is one thing but it’s just too far a distance and certainly if you tried to install one of the supplied coils that way the coil would need to be stretched that much it would deform it.

Not actually an issue to regular builders because you would naturally just fit the leads to the inner sides while wondering why we have outer lips (just adds confusion for someone less experienced), it does mean though you need to hold your lead under the screw head while you clamp it down.

As explained in the last section you need to hold your leads underneath the screw heads while you fasten them down but it doesn’t stop this from being a very easy build. Once secured, snip your access leads and then you can use a coiling rod or fit for purpose tool to alter the position of your coil if needed.

Then i always just recheck the screws are still tight and then give the coil a few low wattage pulses to check for hotspots and burn off any residue.

Wicking is straightforward just cut your cotton ends and poke down into the channels, if using 50/50 then i would just fluff up but if using higher VG like me then thinning the cotton ends slightly before placing in the channels will make for more efficient wicking! Prime your build and then pulse to admire your work!!!!!!!

How It Vapes? And Thoughts!

Another outstanding MTL RTA which also allows for a quality RDL! I do like the innovation shown with 3 independent airflow controls but after loads of experimenting for me the top airflow just allows a MTL/RDL RTA also give a much looser draw but adds slight turbulence and certainly doesn’t add anything in regard flavour. The other thing i noticed is while using a combination of the bottom two airflows i had no leaking whatsoever, not even a drop out of the airflow holes but if i used the top airflow as well for a period of time i wouldn’t go as far as saying i had leaking issues but did get slight weeping out from the bottom two airflow outlets. The top airflow isn’t top to bottom and can only think the weeping is caused by the top airflow being open also disturbs the vacuum in some way.

My only other issues is the long threading on the top-cap making filling time consuming, the confusing outer lips on the posts and although i like the Ultem/Gunmetal combo on mine and for that look don’t mind having to train my eye to see the liquid level it does need pointing out that visibility of your e-liquid isn’t great and some just don’t like the Ultem look! Really there should of been a clear tube also included along with matching drip tips giving people the option!

So after some experimenting and coming to the conclusion i had no need for the top airflow that’s when the Trio (now the duo as far as i am concerned) began to really impress. You do need some bottom airflow as just using side did see slightly muted flavour but any bottom airflow option on it’s own or in combination with any side airflow adjustment gave cracking flavour and a silent smooth draw!

This allows anything from a semi tight MTL right up to a RDL and using the two airflows in tandem you can really dial in the draw you prefer, of course you can then introduce top airflow for a looser RDL but as explained that wasn’t for me. Although this doesn’t give a super tight draw it does give a tight enough draw for most and from that right up to a RDL allows for a lot of precision.

Basically the idea is using the bottom 2 airflows gives MTL draws and then you can introduce top airflow for a direct lung draw but my experience was the bottom two airflows could be adjusted not just for MTL draws but also for a very decent RDL vape while introducing top airflow indeed gives a much looser vape but the flavour and smoothness suffered slightly!

So to sum up another top drawer MTL RTA which along with it’s innovative trio airflow design adds versatility and precision with airflow adjustments. At it’s best just using the bottom two airflows in combination gives anything from a semi tight MTL to a RDL with cracking flavour and silent smooth draw!!!!!!!!!

I would once again like to thank the Healthcabin for supplying the ZQ Vapor Trio MTL RTA for the purpose of this review, thanks for reading and stay safe!