Contents hide
1 1. What is a POD System?
2 2. What’s the difference between the traditional cartomizer and POD system?
3 3. Refillable vs pre-filled pod systems
4 4. Pros and Cons
5 5. What’s the Best Vape Kit for Beginners Then?

Actually, pod system is not pretty new, it has hit the vape industry since 2017, but it gets more popular this year, and now they’re everywhere. For many beginners or the smoker who is going to vape, what is a POD System? they may have no idea

POD or “ultra-portable systems” are essentially the middle-ground between your simple gas station vape pen and a $100+ box mod. The design is similar to that of a cartomizer, but with much more versatility in terms of liquid-capacity and power.

2. What’s the difference between the traditional cartomizer and POD system?

The fundamental difference lays in the traditional cartomizer and an ultra-portable POD system is that the POD systems are equipped with cartridges that contain the coil, wick, and the e-juice–essentially everything you need. These portable systems are also more powerful. While a vape pen or cigalike battery caps out at around 180mAh, ultra-portable devices can reach upwards of 300mAh.

Perhaps most impressively, POD systems are fairly cheap. For around thirty bucks, you can get scoop up what’s considered to be a high-end ultra-portable POD system, whereas lower-end models will cost as little as $15.

Every pod system can be sorted into two categories: refillable and pre-filled. Each style comes with their own pros and cons. When purchasing a pod system, it ultimately comes down personal preference.

Refillable pod systems: give you more freedom in terms of flavor. Also known as open-system vapes, these devices utilize empty pods that are manually filled by the user. The main advantage to them is that you have a wider range of flavors at your disposal.

Pre-filled pod systems: also referred to as or closed system vapes, are non-refillable pod vapes that use cartridges, known as pods, pre-filled with e-liquid. The main advantage is not having the complication of choosing the right e-liquid and the convenience of not having to fill them yourself.

Like any vaping approach, each path comes with its own benefits and drawbacks. In every case, let’s take a look at some of the pros and cons of these ultra-portable vaporizers and see how they compare to the average device.

One thing that sets ultra-portable devices apart from your standard vape pen is that they’re incredibly easy to use. What’s more, POD systems are often pre-filled with higher quality e-liquids that appeal to the seasoned vape veterans

Almost all the pod systems are made to cater your palm shape and have many colors and patterns, thus giving vapers a broad range of unique vaping options.

Box mod users typically prefer e-liquids that have a higher VG ratio, since that’s what most sub-ohm tanks are built for. POD systems are equally capable of vaping those thicker e-

The best news for all users is that, despite their smaller size, some ultra-portable cartridges are equipped with sub-ohm coils—a massive step up in technology that’s still totally inaccessible for your average everyday vape pen.

Why the Ultra-portable devices can carry much more nicotine? This is due to their use with nicotine salts – an all-new delivery method that allows for higher concentrations of nicotine without sacrificing smoothness or flavor. Since the average sub-ohm tank is suggested for use with liquids that offer nicotine between 3-6mg, for newbies, they most likely will not get enough nicotine from the standard box mod/sub-ohm tank setup. Check the Nicotine salt e-liquid guide here

Ah yes, the dreaded leaky tank. This is a problem that plagues vapers from all walks of life. As if carrying the juice bottles around wasn’t already bothersome enough, there’s also the possibility that a cap loosens up or liquid seeps through the smallest of openings.

Well, not with ultra-portable POD systems. Since these bad boys are pre-built and use disposable cartridges, there’s literally zero chances of running into the same leaky nonsense that comes with your average tank when using a non-defective POD system.

Compare that to a box mod, where the firing button is the least of your worries. Sure, you’ll probably find some basic vape pens that work the same way, but without the quality or power of a POD device.

One of the best things about vaping is the vast and nearly infinite marketplace of e-liquids to choose from. There are literally endless combinations of flavors at your fingertips, spanning across hundreds of different brands and they’re growing every day. It’s something that vapers from all walks of life can enjoy—except for POD users, that is.

The problem (currently) with ultra-portable devices is that their unique designs require specific cartridges. This means that we’re limited by the flavor selection that the manufacturers provide. So if you see a POD system that you’d love to try, but are unimpressed with its compatible flavor selection (or vice-versa), then you’re out of luck.

Obviously, smaller Liquid Capacity is the common drawback of all the pod systems. Try to imagine forcing a 4mL tank onto a vaporizer that’s just a little larger than a cigarette – not going to happen.

While the tiniest POD devices can contain less than 1mL (which still amounts to roughly one pack of cigarettes), some of the larger POD systems can hit the 2mL mark.

Although the battery life of these ultra-portable POD systems is higher than its smaller cousins, it simply cannot hold a candle to the big leagues. Box mods will always win the day when it comes to longevity. A typical ultra-portable device will get you about two to three hours of mild use on a full charge.

This won’t be as big of a problem for a box mod user, who might just carry the POD for portability while out on the town. But if you’re exclusively using a POD device and nothing else, you may need to do so sparingly depending on where you’re at, so be sure to keep it charged.

5. What’s the Best Vape Kit for Beginners Then?

It’s significant to choose a right one to begin. In every case, your choice should be determined by your very own specific preferences and nothing else.

The way I see it, you have two potential routes to your ideal setup, which are as follows:

But for now, I will say that most, beginners will likely be better off with a pod mod.

Pod mods are essentially composed of two parts: the battery and the pod. The pod is where the juice lives and the battery are what powers the pod.

Pod mods are also mouth-to-lung as well, meaning when you inhale them it is exactly the same as a cigarette, whereas most traditional vape kits require a direct to lung (DTL) inhale.

Some pod mod systems let you refill the pods with your own E Juice, while others are closed, meaning you have to use pods made by the device maker.

EXAMPLE: JUUL is a closed system; the SMOANT S8 Pod is open

Check out the list of the best pod system 2018, you may find the one you want. 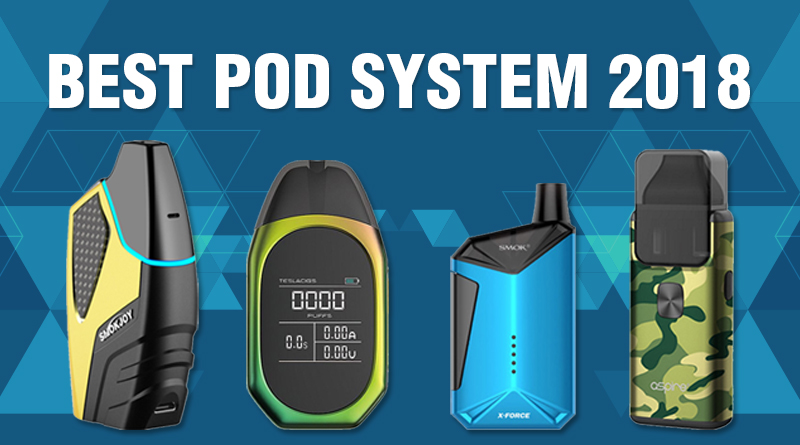